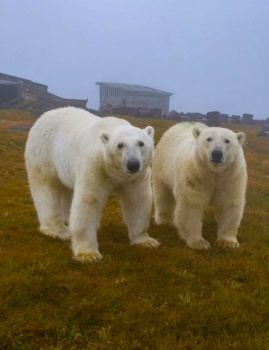 Polar bears frolic on an abandoned island in the middle of the Russian Arctic.
Created by Bethean Published 25 January 2022

I agree with you @NoonieChoo. Here is more info that I posted on another photo in this series: "When traveling to the Russian Arctic, photographer Dmitry Kokh and his expedition were passing near the Kolyuchin Island in the Chukchi Sea. They spotted abandoned buildings -- and some movement around them. As they approached – it turned out to be polar bears! The building they were walking around was a weather station built in 1934 and closed and abandoned in 1992."

I love the polar bears…who doesn’t. But, they look displaced. Where is the snow and ice? I worry so!! Their beautiful white coats are smudged with the dirt that’s on the ground. Poor Babies…only a handful of people trying to alert, and do SOMETHING on this EARTH 🌎 Shameful 🙏🌎

"Thank you polars!" Love this series, thank you!