The pistol James Bond should have had 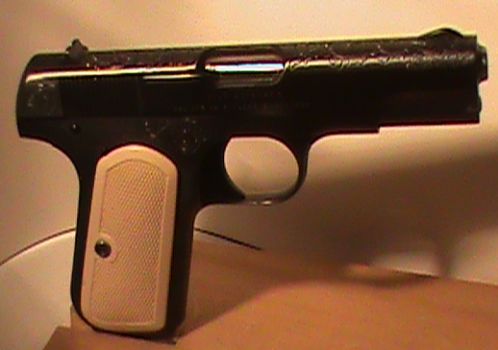 Colt M1903 Pocket Pistol in caliber .32 ACP. Came to me without finish. It's been lightly engraved and blued. Ready for sighting in and making a holster.
Created by OldManMontgomery Published 2 September 2017
Why this advertisement?

This puzzle - I have been notified - has been removed from the site. It does not fit into the woke and socialist mentality of the ruling junta.

Late to the game here, but chiming in briefly. I have to laugh at people who"believe in" the 9mm. What a joke. Why is it called "parabellum?" Because it's "for war" and in war you want to wound your enemy rather than kill him. It puts a much greater burden on the enemy army. So the 9mm was DESIGNED SPECIFICALLY FOR WAR - - TO WOUND! Jeff Cooper said it best. "The 9mm may be a 50% stopper, but there's no rule that says you can't shoot'em twice."

I've carried a Colt Delta Elite 10mm under my suit and it's never been detected. I use a leather Bianchi competition quick-draw holster in the small of my back. A couple of months ago I found a Delta Elite from 1989 NIB at a local gun show and snapped it right up. The guy just thought it was "nice." It is "perfect." My original Delta Elite I got in the '80s and shot many a combat match with full-house Norma ammo. Talk about flattening a pepper-popper!

Bob, 'pea shooter'? You do understand the era of the Grande Puissance (High Power) which derived from the round count rather than the power of the fired cartridge was popular in the same general period in which the 7.65mm Browning was adopted as a military and police weapon?

Do you also understand the 9x19 cartridge is much liked and popular with those who cannot handle recoil of a real sidearm AND rely on high round count (many wild shots) rather than studied accuracy?

You probably missed my comment prior about usually carrying a Colt Commander in .45 ACP. My comment about the pistol "...James Bond should have had..." was directed more at Ian Fleming and Geoffrey Boothroyd than a person who carries for self-defense.

It is YOU who are talking about a peashooter. Frankly I think a properly loaded .38 Special revolver has better stopping power. More than that, it's the user, not the tool making the difference.

Cove: "Bite?"
I've been bit by - let's see - various variants of the M1911 design pistols (including M1911A1, commercial Colt Government Models, commercial Colt Commanders (lightweight) models, the Springfield copy; several Beretta pistols, including the 1935 model and one borrowed M92-(something or other), the Savage pistols (both 1907 and 1917 version) and a Mauser HSc. The Model M, being 'hammerless' (to the eye, there is a hammer concealed in the slide) cannot 'bite'.

I collect 7.65mm caliber auto-pistols from the Art Deco period. The Model M is my hands down favorite.

My greetings to your lady wife. I have a niece with MS and my late brother had it, until he died from complications from pneumonia. I shall be praying for her and you both.

You are talking about a pea shooter try a real weapon like the Browning 9mm.

Monty you have it right. The Colt shoots so much better. My wife has MS and can shoot the Colt and cycle the slide without assistance. The PPK is much harder to operate and bites if you have meaty hands.

Viper, the Model M is narrower than the PPk. For the record, I have carried a Colt (lightweight) Commander while wearing a dinner jacket and trousers. The Model M is metaphorically downhill from there.

And yes; accuracy and shot placement will indeed make up considerably for 'power'. Something I've touted for years.

Ah, Jack. That makes a bit more sense to me. What works in the movies? Well, voicing an opinion in opposition to mine is certainly fair game. I just expect a bit more reasoning and logic involved.

The .22-250 rifle I have is but a humble Remington, but it does shoot rather tightly. I don't have a range stretching to 600 yards.

and lets not forget this pistol has to be hidden beneath a tight fitting tuxedo where the ppk has the advantage. and of course 007 can hit the eye out of a rattlesnake at 100 yards so he doesn't need stopping power LOL

The PPk is in fact more popular. It has been promoted both commercially AND is known from Ian Fleming's books. It is also smaller - harder to grip and control - the trigger pull is considerably worse, and it costs more.

The Colt 1903 was made from 1903 until the early 1940s. Discontinued due to the war effort and the rather antiquated machinery used at the Colt factory.

The PPk was purchased and issued by the German Army (both before and during the NAZI era) and the federal German police.

From the sound of your question, you seem to be confusing 'popularity' with 'effectiveness'.

From the Personal Defense website, see the article on the Colt 1908 (essentially same pistol) and update. The quote you cite seems to be directed at use in the James Bond movies, not reality.

Nor do many serious shooters agree with your thesis. Shooters and experienced defensive carriers tend to prefer the Colt (actually John Browning) designed 1903.

So. Go ahead with the PPK. I prefer effectiveness to 'popularity' based on somewhat lacking opinion.

Probably more a hip pocket type. Rather small pistol for a shoulder rig, the straps and all out weigh the pistol. Not chamois, either.

Shoulder holster I would suspect. ;-)