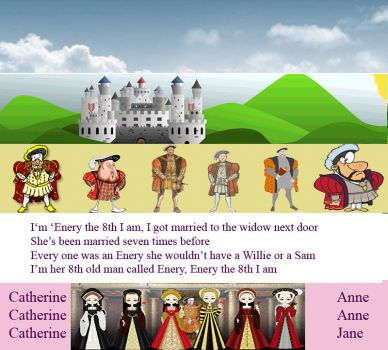 no, you just appreciate good music!

good old songs I was listening to the radio last night thought they were singing in Chinese and every song ounded the same, must be getting old

Delightful puzzle, June! Silly fun song. I had no idea it was written so long ago. (✬‿✬) - Teresa

Second verse, same as the first!

Love this song! We were having a family reunion and all of my grandfather's brothers (6) were there. This song came on and they all started singing, with the cockney flair, and my friends and I were gobsmacked. We thought it was a new song by Herman and the Hermits. Good times!

or buried in her garden

The other two 'enerys must be in the castle. :))

"I'm Henery the Eighth, I Am" is a 1910 British music hall song
by Fred Murray and R. P. Weston. It was a signature song of the
music hall star Harry Champion. In 1965, it became the fastest-
selling song in history to that point when it was revived by
Herman's Hermits, becoming the group's second number-one
on the Billboard Hot 100 chart. The lead solo on the Hermits'
version was played by the group's lead guitarist Derek "Lek" Leckenby.

That's what I'm afraid of.

i have others you can swap it for

in 1910 it was the fastest selling song ever, later recorded by Hermit's Hermits

What a silly fun song - can't believe how popular it became.