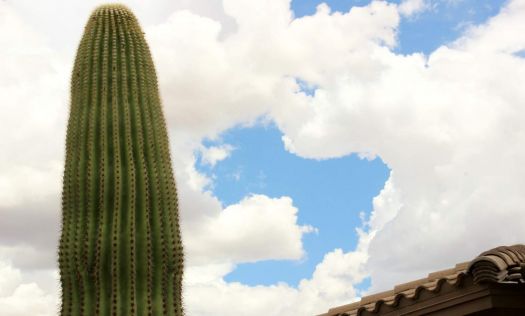 The clouds were forming for some late afternoon rains as I came back from my walk yesterday afternoon. The sky was a brilliant blue where it showed through the clouds and I loved the interaction with one of the saguaro in my front yard.

I should have said "aren't really pigs". My fingers are a bit stiff today so didn't catch the mistake.

Toto - When you said "wild pigs" I didn't think of javelina or peccary - I thought of the feral hogs that are running rampart in the SE (FL to Texas and beyond) doing major damage to the habitat.
When we were at China Lake, almost all the Base housing had been done away with. There were more civilian employees living in the remaining Base housing than A/D.

Wasicu, I remember being in and out of China Lake a couple of times in the 70s, while prepping for exercises at Ft. Irwin. Nothing much out there but the wild life then, same as Ft Irwin. I dislike the Chollas - we have 10 varieties in the Sonora, all of which grow like weeds. The community I live in is pretty good about keeping them at bay. Speaking of bears, oddly enough, we had one decide to go picnicking with a family about 15 miles from my home up one of the canyons. The family was a bit surprised. The pigs I mentioned are really pigs, they are Javelina. They look like the wild boars in Europe and have easily adapted to live in the city and burbs. They particularly like that we humans have planted all these lovely fruit trees just for them. I go out everyday and pickup the fallen fruit to keep them from invading our yards and leaving us rather messy and smelly presents in return.

Yeah Toto - desert life can be 'interesting! We lived in the Mojave at China Lake for 3 1/2 yrs in latter part of the '80's. Cacti wise - the main worry was jumpin' cholla when out riding the horses (or bicycling or hiking/walking). Snakes were a big issue - sidewinders, Mojave Red and Mojave Green (all forms of rattlers) were present. I don't remember any issues with bats or feral hogs in the area but we did occasionally have a mountain lion or bear come down out of the Sierras. Coyotes and bobcats were not commonly seen but not rare either. Oh yeah - not to forget the kangaroo rats that were a continual battle to keep under control in the feed and tack rooms.

Here - we have lots of mountain lions, coyotes and prairie dogs - rattlers too. Several different prickly pear and a couple of barrel cacti that are native to Zone 4 (-30F). The last bear in the Hills was killed in the early 1900's but from recent verifiable reports in the Northern Hills, there are probably some back in the Hills

Substitute an oak for the saguaro and a composite roof for the tile and the sky could by Kansas, Marilyn.

It does make a pretty scene with the green saguaro, clouds and blue sky.

You're welcome Marina. Glad you enjoyed it.

Tricky puzzle to solve but very interesting. Love the photo you've taken. Thanks.

Living in the Sonora is fascinating, wasicu. We share our neighborhood streets with coyotes, Bob cats, and wild pigs. We tiptoe our way around the 20+ varieties of prickly pear cacti and 50+ varieties of lizzards. We keep watch overhead for the bats and watch under foot for the scorpions. Makes for interesting days.

When we lived in the Mojave, I took several Natural History courses through Cerro Coso College that included field trips. One was about/in the Sonoran Desert. We were told that on average, Saguaro do not grow 'arms' til they are approx. 80 y/o. Some can a bit younger/some a bit older - each are individuals.

Wasiscu, my husband and I play the guessing game with how old it is. Best guess we have is between 30 and 50 years. My landscaper thinks it'll be another 25 years or so before it grows and arm, so I probably won't be around to celebrate its first arm. Still, it's the oldest of five in my front yard, and I should be around long enough to see them grow another foot or two.

A young Saguaro for sure.

This is a relatively young spear saguaro around 13 feet tall, Gloginge. It looks healther now as is stocking up on water during our rainy season is quite a bit larger in the girth than it will be come later this fall. Water weight gains plague as all, I suppose.

That looks like one healthy Saguaro cactus. Love the green and blue with the white too.