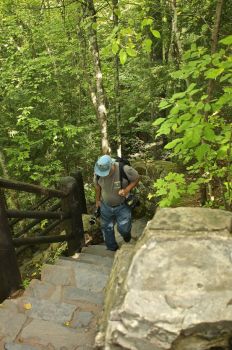 Proof, PG can carry his own equipment without whining!
Copper Falls - Mellen, WI
Created by chickster Published 11 September 2017
Why this advertisement?

This IS Copper Falls, Li! I goofed! All the stairs at Porcupine Mountain are wood! Fixing title! LOL
Selective hearing, young man!

Pumpkinhead I was using words that could not be found in the American Collage Dictionary but can be translated in the Italian American street lingo. Sandy never did hear them either.

It look so much like the Copper Falls stairs, too. He navigated those, as well. He's not too bad....

For some reason, I just KNOW he's complaining!!!! LOL!

Thank you for your comments, Floyd, Shirley, mariolyn and Ardy.

Wow. Congrats. Richard. I couldn't do that even without the camera equipment. Nice capture, Sandy. ☺

Caught in the act.

Wow, Richard, that's some serious exercise, hauling those cameras up those steps, would you like me to help you young man?

Love the forest (woods) and the brave hiker complete
with photo equipment to capture those SPECIAL moments.

Sure they are a biased as can be. But now that I am fortified with tadpole wine I can withstand the onslaught.

You two just wait 'til the women folk show up!

You would think Lela but it appears there is no end to spousal abuse. This never happened prior to the "I DO" thingie.

There must surely be a law against this sort of discrimination!