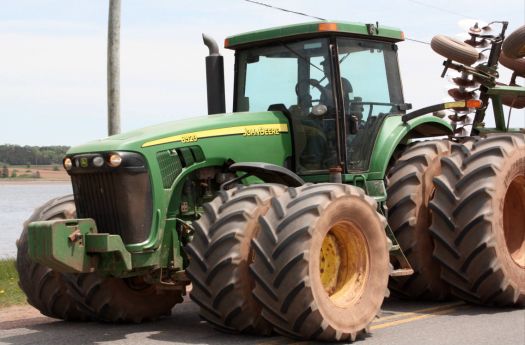 A drive around Prince Edward Island...south-central shore...grid lock on PEI ;)))

In June we travelled by rail from Vancouver (British Columbia) to Montreal (Quebec) where we spent five nights. We then took an overnight train to Moncton (New Brunswick). Next we drove to Prince Edward Island, Cape Breton (Nova Scotia), and flew home from Halifax.
Created by gemstone Published 6 October 2019
Why this advertisement?

They do it here too Impie..

I do understand Andie, your country has to obey the rules of the EU as well....but for the family farmers enough is enough!!!
Normally those tractors don't drive on highways, but last week they did, which caused major traffic jams!

Impie it's not one but tens of noisy ones that go up and down our road these days because the farm next door has expanded a lot .
And the French agricultural tractor drivers do protest too !! meeting on the main roads and organizing "go- slow protests" ,which at times lead to huge traffic jams.
But sometimes like Faye you come across the occasional "snail" in front of you and you follow it for 10 miles at 20 kms per hour... SIGH...

Oh yes, Faye and lots of people were late at their work or decided to take the day off or to work from home that day! But most of us were sympathetic with the family farmers, because it took a while but we're all fed up with all those idiotic rules layed upon us by the EU!!! :(

In truth, Andie, although most of PEI is rural, it was the beginning of the season and we only met a few of these on the road...and as you say, the drivers were considerate and would pull over. And...just think, we might have passed the very field that grew the next French fry you meet! LOL ;DDD

Bet the trains were packed that day, Impie...you sure wouldn't want to be on the road then! We had a similar protest in Vancouver a few weeks ago with huge logging trucks.
I think family farms have it tough enough in trying to survive so I really wouldn't expect them to cut their stock...but the huge agrifarms are another story. :(

Our Government (especially the left winged parties) blame our farmers for the nitrogen problem in the Netherlands! They again were told to cut down half their stock, after they already had to do so couple of years ago. The farmers refuse to put up for taking the blame any longer whilst Schiphol Amsterdam Airport is allowed to expand again but already causes a major part of the nitrogen problem!!
1. October from all over the country farmers came to The Hague (Residence) on their trucks -by road/highways- to demonstrate.

@Andie2a1383 If you think one truck makes traffic difficult, you'll be glad you weren't in my country last week! Check out the link....(it's in Dutch but the images speak for themselves! ☺☺

I know they are necessary but when you live in a rural place they often make traffic difficult ,still most drivers are sensible enough to pull over on the side of the road to let other cars pass.♥☺♥☺♥

Sorry, Impie...you're out of the "kid" bracket. Hee hee ;DDDDD

This was a "drive by shooting", Andie, so we really didn't hear it in action. They were just starting to prep the fields when we were there...they grow scads and scads and scads of potatoes in PEI. A few years ago we heard on the news that most of the potatoes were bought up by McCain's for their frozen French fries. :)

We were behind it...slowly...for a few miles, Ardy...until he could pull over on the shoulder to let us pass. :)

So John Deere is there too. That's a big one. I'd hate to be behind it. Thanks, Faye.

This one being bigger than those of my neighbour ,next door,I just hope it isn't twice as noisy !!!

no she won't, Because the real darn kid came along ☺☺