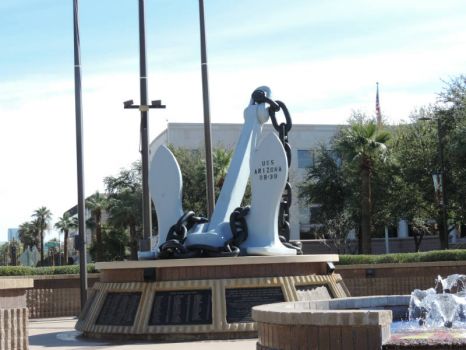 Wesley Bolin Plaza in downtown Phoenix, you can view one of the anchors of the USS Arizona and one of her two masts. The mast and 16,000 pound anchor were salvaged from the Arizona after she was sunk by the Japanese in Pearl Harbor, Hawaii on Dec. 7, 1941. The Arizona's other anchor is currently displayed at the Pearl Harbor museum in Hawaii.
Created by lyndee Published 24 March 2016
Why this advertisement?

Thank you Toto for the additional info. There's a lot of history there.

The initial inspection of the Arizona in 1942 revealed the ship to be a total loss. The Navy did some salvage for spare parts from the US Arizona in 1942, however, the damage was so severe that the deemed it too hazardous to continue major salvage operations. In 1943, the remaining hulk was determined not to be a hazard to shipping and the decision was made to let her lay where she remained with her dead. Very fittingly, crewmembers who were assigned to the Arizona on December 7, 1941, have the right to have their cremated remains interred in the ship.

Yes, it's a very good tribute!!

A great tribute.
Thanks Lyndee.

That's what i meant Lyndee (i know some would understand it the way snacker did), and that would be a nice thing to see really.

I wonder if he's been there Laura.
Don't know why Janet, but maybe because it was the ship was the Arizona.
The ship was never raised Lunie. They built a platform over it and you and look down into the
waters and see it.
Snacker, I think Dilubreuer meant if the ship was still down under the water. :)

it wasn't in Australia

Was it also raised up from down under?

How wonderful to see them Lyndee. I wonder why Phoenix was chosen!
Thanks and hugs.

I think Richard would find this interesting.

That's true Lunie. I wonder why only parts of it was retrieved. I did get the privilege of seeing the ship when we were in Hawaii many years ago.

At least some things were salvaged out...