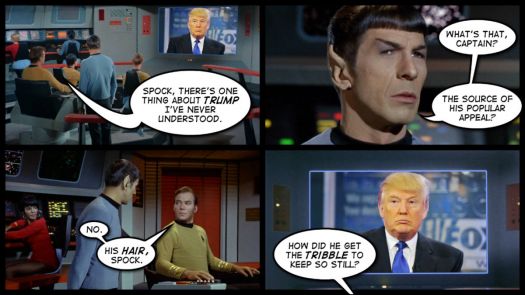 One of life's mysterious mysteries........
Created by Sir_Wainthorpe_Bugosi Published 12 October 2016
Why this advertisement?

Wassamatter my language? There ain't nary a cussword 'n my whole rant, I mean discourse, which is different from intercourse, which only civilized people can have. HUMMPHH!

Looky here, you slimy, smooth-talking overheated grease-ball........that hat was GIVEN to me, by an admirer........and MIND YOUR LANGUAGE! HMPH!

"Tribbles are STOOPID". . . . . . . . that is just SO UN-PC! You can't call any group STOOPID these days. Aren't you aware that there is an effort underway to get the word "retarded" banned? (Boy, that would complicate how we talk about you behind your back.) So calling Tribbles STOOPID puts you squarely behind the 8-BALL, mister retard.

And by the way, plus which furthermore and also, to-wit: your *elegant hat-thingy* is just a cheap paper party hat. That's right, and you probably swiped it off some kid's head while he was blowing out the candles on his cake, and left him sobbing as you pranced away! That's what I think!

snigger worthy indeed, the trouble with tribbles is they breed..

Mr.Squirtz.........The fact that Tribbles are STOOPID, explains why I don't have one nestling beneath my elegant hat-thingy..........

Maybe Tribbles are just SMARTER than you all think! Ever think of that? Huh? And being so smart they would naturally pick esteemed, natural world leaders as their allies, role models and hair-simulation partners. This explains why lelabug DOESN'T have a Tribble on his head! Heh-heh-heh........

Theory: the tribble is able to keep still because it managed to relax enough to empty its bladder of all that orange urine that makes "the subject's" skin that strange color!

Because it is dead. So is he in the polls.

(I thought I'd borrow the favorite comment of 3 other Jigidiers, who seem to have a very limited verbal/emotional response to everything....).