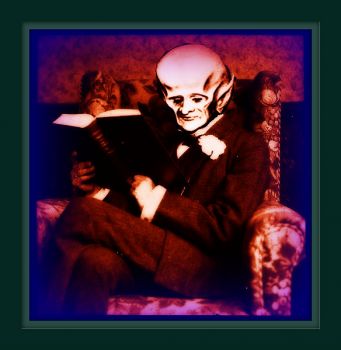 My great-great-not-so-great-grandfather, the studious Sir Leland Z. Bugosi is shown in this charming study, stringently studying in his study...........
Sir Leland Z. staked a claim to fame with his startling discovery of the striking similarity between earthworms and tadpoles.......the systematic study of statistics had already told him that 99% of the worm population flourished underground - his stroke of genius was to start breeding tadpoles underground, which led to the subterranean tadpole streams seen today throughout Bonga-Bonga..........
In his lifetime, Sir Leland Z. was described as 'stark staring bonkers' by many a learned gentleman........his standing in the pantheon of lunatics may have diminished, but his steady rise to stardom as a scientist is slowly starting to show what a true genius he was...........
TESTING,TESTING......
AHA!.......I CAN COMMUNICATE HERE!........FEAR NOT, FAITHFUL FOLLOWERS-NOT ALL LINES HAVE BEEN SEVERED!
Created by lelabugosi Published 7 May 2013
Why this advertisement?

Oh not a King then, another disappointment. wish I hadn't bothered to sharpen my pencil now.

But patsquire - what are we to do but hope for understanding? We are quite a few who haven't English as our primary language - we can't really help it!!!

A king for a grandfather eh! Always thought he had an heir about him. Maybe the stories of his millions are true. Must look into this more closely may be a bonus in it for me. Publish and be damned!

Why don't we just face the facts and admit that we all sound like a bunch of goofballs outside our primary language(s)? For instance, how goofy is lelabug to think that "grootvaderkie" could mean uncle?

I am certainly glad that I was out for the day otherwise, I would have been beside myself, and BOTH of us would have been worrying about our Fearless Leader being incommunicado...and then I would have started in on the tadpole wine...and of course, drinking for BOTH of us could lead to problems similar to SLOG...and we certainly don't need two SLOGs in Bonga Bonga...hmmmmm...speaking of the tadpole...I guess it's five o'clock somewhere...be bak son (as Pinnie the Wooh used to write)

Thanks, Hanne-without-pipe........Yes, some of the translations are hilarious!
....and david-many-numbers has just said that Willem I was his uncle (Bonga-Bonga translate).....

gerdje, if you translate it on google translate from Dutch into Danish it's something VERY strange!! It's wonderful to hear you again Lela, browers are not reliable these days!!

not-chomping...........This is the translation I got:-
We want to get rid of Willem (I of the Netherlands), if Willem were wiser, we would welcome Willem
(This was written on the walls of the Brussels Opera House during the uprising which led to Belgian Independence.)...........

gerdje##'s....whose Willem and why do we want him.....did he help solve the problem of Chroogle Grome for Lelabug? And what does he have to do with david_even_more_##'s.....?

I'm very happy our friend is back talking/typing.
Thanks all for the info on the cracklings!!! YUMMMMMMMMMMMMMMM

Dare we hope, do you think, that now that he realizes what a GIFT speech is, he might, possibly, maybe, somehow start to MAKE SENSE? Heh? Y'think? (Hee-hee.)

sometimes happens, i studiously avoided the chrome don't hold with these new fangled ideas. glad it all worked out, where would we be without our earless feeder er or something like that.

I TYPE, I SPEAK!!
Chroogle Grome not working properly, but nobody has silenced me on hexplorer........

Frøken Frida Frises friske fiskefrikadeller fås fredag formiddag! Write it with ph instead of f it does look brilliant!!

She sells sea shells by the sea shore. Mmmmmmmm.

Soooo...if lela can't get word out, how does many-cakes know??? I say, how does SHE know? Unless, of course , SHE is the one who is trying to silence him!!!

Ask him to step off the wire, Joyceee!!

sounds as if he has gotten in among the pork scratchings, pass some over here please.

Do hope it did manage!!

Iiiiii been workin' on the Fly road,
Allllll the live-long Jam.

Waaiiiit, this song is not a-goin'
The way it ought to beeeeee.

(Oh I thought the FLY squashed the JAM with his thumb)

Hi, Tatty, you are missed, too...expect you will be back when things slow down a bit for you. :)))

Congrats, Juneee, then you had a nice dinner, hadn't you??!! Am I very relieved to hear that Z is pronounced B - then it all works somehow.....!! Poor fly, I hope he let it eat a good amount before he sent it to the eternal fields of fresh smelling dung!!

Just to wish a nice week to all people in Bonga Bonga/Bugosiland. I really miss you guys but life rushes.

I figured uncle grampaw-grampaw came to possess the title "Sir" by way of being the founder of New Zeeland, him being named Leland Z (Leland Z : New Zeeland) and the raining, reining, rayning queen-thingy or king-thingy of the day, at the time, then so to speak knighted him, you know, sort of swang the sword over his shoulders or sumpin' and said, "Rise, sir nite." Is what. But not if his name is Zed, see, that wouldn't work, wouldn't rhyme, not poetical enough.

which also reminds me, time for me to settle down in my little night nest - oh and we caught the dratted mouse at last.

which somehow reminds me, where is SLOG? hopefully not in Cleveland with the P Squirt's odd friends, or has she just settled down to a cosy life of making soup and gingerbread for KBoy?

I believe that Great-Great-Not-So-Great Grandfather is still with us in a metaphysically-spiritual-not-really-here sort of way, and as such can appear to some people who are sensitive to this sort of thing......(such as gerdje-numbers) .........
I have been told that he was actually observing a fly which was eating a speck of jam on the corner of his book - before squashing it with his thumb........
precious-pebble.........if Great-Great-Not-So-Great Grandfather had really been here, he would have told you that the 'Z' was pronounced 'bee' (as in 'B').......
pd-whateveritis........that is indeed enlightening news, in a mysterious sort of way..........maybe Merry-company was in Cleveland all this time?!..........Anyway, I hope she passes by to say 'hellooee'......

light or no light ...it does not matter . He is not reading the book at all : he is showing his book every body , becaus he is so proud . Why ??? We met us an hour ago on a very important celebrity party with 9887 prominent guests and after he ask me 67 times I give him my signature in his book.

Sorry to interrupt this enlightening and illuminating conversation, but a quick note to those who remember Jolyco from these pages--I mentioned her to whatnauts the other day, and she checked, which I hadn't done in a few weeks, and Jolyco's been signing in recently, including today! Maybe she will rejoin us! :-)))

had he been naked, perish the thought, he may have been contemplating his navel. He is not however studying his book, unless he is showing it to someone behind his chair? Or just having his portrait painted to show the World he has purchased a studyin' kind of book, indeed a tome.

He is luminous!! If he didn't wear close we were not able to see him at all!!

Well, I appear to have missed a wealth of knowledgeable knowledge, in a philosophical, scientifical sort of way........
I believe it is being transferred not-so-subliminally by great-great-not-so-great-grandfather Leland Z, using his elegantly pointy ears as transmitters ......... Who knows, but that some of us may become beneficiaries of the sublime secrets of tadpole wisdom stored forever in his great dome.........
Ingest this wisdom carefully, and just ignore him if he starts going on about 'How to win every time at Ludo' or 'Pelvic gyrations for the over-sixties'...............

where have our men been? Is there a new college on Bingybongy, could any of us develop a brain if we enrolled? Well I did sorta understand the Pee Squirt and have always found the sight thingy the most wonderful wonder in all the world so one never knows I might learn something to my advantage.

All my life I *THOUGHT* I knew that Einstein's theories WERE THEORIES, never proven or disproven. But it turns out both his Special and General Theories of Relativity are in everyday use and affect us in this modern world in which we live in. I am perfectly serious, and completely shocked and surprised by this. 66 and still learning!

....For a real, everyday example of time travel, consider the satellites of the Global Positioning System. Were it not for built-in calibrations, the GPS atomic clocks would gain 38 microseconds over terrestrial timepieces every day, throwing off their location accuracy by several miles. "Clocks on Earth tick a tiny bit slower (sic: he means faster) than satellites out in space," said Lloyd. The reason: time dilation, as described by Einstein's two theories of relativity.

According to Einstein's special theory of relativity, the faster an object moves relative to another object, the slower it experiences time. For GPS satellites zooming around Earth at nearly 9,000 mph (14,000 kph), this effect cuts seven microseconds off their clocks daily (relative to clocks on Earth).

The second effect, explained by Einstein's general theory of relativity involves gravity. Clocks closer to the center of a gravitational mass, such as Earth, tick more slowly than those farther away. GPS satellites orbit 12,500 miles (20,100 km) above the ground, and as a result have 45 microseconds tacked onto their clocks per day.

The net result of the two relativistic phenomena is 38 microseconds, which engineers have accounted for with GPS technology. If they did not, GPS would be inaccurate by miles.

Empedocles... believed that Aphrodite made the human eye out of the four elements and that she lit the fire in the eye which shone out from the eye making sight possible. This emission theory was held by Plato...
bzzzz
Euclid questioned that sight is the result of a beam from the eye, for he asked how one sees the stars immediately, if one closes one's eyes, then opens them at night. Of course if the beam from the eye travels infinitely fast this is not a problem.
bzzzzz bzzzz bzz

And apparently uncle grampaw-grampaw is too cheap to burn a few extra candles. "Waste not, want not." says the tadpole mogul, as he sits in his $2,000 suit on his $10,000 antique chair, and he ain't exactly reading no paperback book, neither.

Ahh, the rich. They are so very different from thee and me.

His ears are so refined compared to the present day Bugosi offspring....

Perhaps he thought he was light enough in himself!!!

I won't argue with that.

T'is rather a gloomy puzzle to solve!

Who put the lights out?