Saving it for later 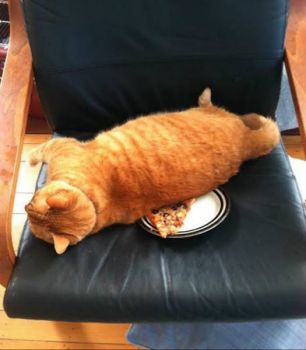 LOL Pammi. Could be completely oblivious to the slice of pizza as food. Only an irritation when trying to nap. :)

what a lazy cat, but it makes for a good picture.

Mine!! At last the chair is mine!!!! Just because I am a tad uncomfortable with something digging me in the back does not matter one iota. ☺☺☺☺☺

I think someone put their plate down to go for a drink,and Puss decided to lie in it!

Wasn't the cartoon character of Garfield a pizza fan?

Sherry, maybe he was just in need of a nap and flopped over on it like cats do. :)

Rather tend to agree, Molly. Probably been eating too much pizza lately anyway. :)

He's in the middle of his dinner - literally!

Wait a minute, I'm just slow...he doesn't really want it because he's not eating it...,didn't realize he was lying on a chair and Returner said it was pizza...he's just protecting it so no one else will ever eat either ...Sherry :)))

Hope you don't mind hair in your food...I've never seen this before...is the plate taken away early if not eaten...weird...Sherry :)))

He'll be wearing it, insde AND outside! :o)

Bet he still eats the meat and cheese off of it. :)

That pizza will be wearing fur.