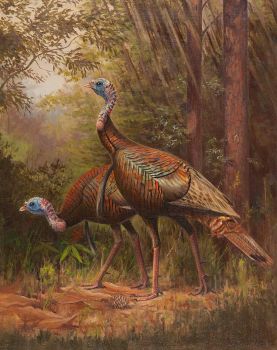 "Born in 1896 in Fond du Lac, Wisconsin, Gromme went to work at the age of 21 as a taxidermist at the Field Museum of Natural History in Chicago. After World War I, Gromme worked at the Milwaukee County (now Public) Museum as a taxidermist, collector, photographer, movie editor, background painter, botanist, geologist, sculptor, and finally curator of birds and mammals.

"He retired in 1965 to devote full time to painting arty, prints and posters. He first gained acclaim in 1945 when he won the Federal Duck Stamp competition. In 1963 Gromme completed to world acclaim a volume of scientific paintings called 'Birds of Wisconsin.'

"He was frequently referred to as the 'Dean of American Wildlife Artists' during his lifetime. Owen Gromme died on October 29, 1991, at the age of 95. Gromme's reputation as a painter of wildlife art, prints and posters enabled him to bring attention and action to important conservation issues such as legislation to protect birds, the protection of the Horicon Marsh, and the formation of the International Crane Foundation. Gromme served as president of the Wetlands for Wildlife organization and was among the first to crusade against the use of chemicals."

Thanks, Nev, for that bit of Gromme's background.

From the site Manor Auctioneers & Appraisers:-

Owen J. Gromme was born in Fond du Lac, Wisconsin on July 5, 1896. He was a hunter and outdoorsman from early youth. Many of his works reflect his great interest in Birds. Gromme often painted to scale, with the use of a magnifying glass for small details.
Gromme worked at the Milwaukee Public Museum for 43 years, retiring from the post of Curator of Birds and Mammals in January 1965. During his years with the museum, he went on several expeditions for the museum, including Alaska, Hudson Bay country and Africa. During these trips, he would collect pieces for large museum dioramas. Gromme often made color sketches and drawings for use in the creation of the displays. These drawings and sketches were the start of Gromme’s serious painting career.

As August heads toward fall, I often hear a soft, quick chirp or whistle in the woods. It has started again for this year. I'm never able to see what must be in the undergrowth but have always wondered if it is turkeys walking around. I've listened to Cornell's bird calls, but have come up dry.

Jan, this evening as the sun was setting, a deer and her two young fawns were running around in the same field the turkeys had enjoyed. They kept running back and forth as though they were thrilled to have an open space to play. After about 10 minutes, they headed up the lawn and into the woods across the road. We are fortunate to have nature unfold right out our window.

Ha, Claire. I haven't seen a commercial in decades. I'll have to depend on the painting to recognize turkeys. :-)

I was partly watching TV late this afternoon and a commercial came on (I don't remember which one it was) that had a turkey (acting like a human being) in it. I recognized the colored neck on it which was the same as these.

Gayle, how lucky you are to have families of wild turkeys to watch. They must be off finding more high-energy food to get them through molting season. The toms should be back to their full iridescent macho glory in the fall. Enjoy! thank you so much for finding this painting and for the story about Owen Gromme.

Ha, Barb, you're probably right about Bill not wanting to know the answer. I suspect that either a raccoon, weasel, ermine, or mink (either/or/or all of the above) grabbed the little ones during the night. I'd be surprised if 50% make it to adulthood.

They are beautiful and what a magnanimous human being, he did so much for wildlife and probably not many know of him, thanks for sharing his history, Gayle. We have turkeys out and about now, too. So far so good! You don't want to know the answer, Bill!

That's a clever way of getting the seeds out of the grass without destroying it. What do you suppose got the four missing little ones?

Yes, they are, Bill. Several weeks ago we had two families of turkeys that hung out in the back field behind the house and barn. In the beginning, there were four adults and 13 little ones. They'd strip the ripened field grasses pulling up on individual blades and letting all the seeds land in their mouths. As the little ones grew, their numbers dropped to nine. I haven't seen them for a few weeks; they probably moved on to the wild blackberries and other goodies.

As much fun as it was to watch the turkeys out back, their colors weren't as brilliant as these. Thanks for your visit, Bill!

Those are some pretty turkeys, nicely illuminated. Thanks, Gayle.