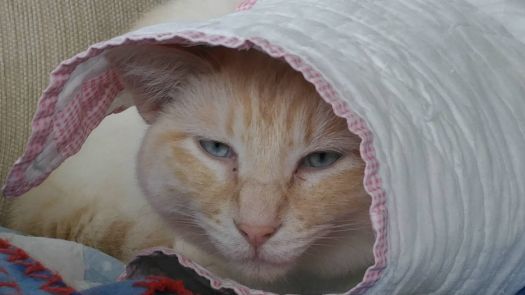 Created by felinefrenzy Published 30 May 2018
Why this advertisement?

she really was, although she kept him at arm's length for the last few months, and I think it was because she could smell that he was sick...every time he came near her, she would hiss at him and eventually he just walked around her...but he started spending more time with me, so he wasn't too lonely.

And then when he was gone, she did react a couple of times a day, especially at mealtime, but then she found me and we had a lovely year together, watching TV, sleeping and spending quite a bit of time talking, again, like you, who knows what each of us was saying, but there was always appropriate speech moments and lots of cuddling...I feel very honoured to have been with both of them at their final moments, and it just hurts so much to even say it...they were very special souls...thank you for letting reminisce, even if it does hurt....but I'm only getting two....I'm only getting two...getting too old for more than two...Sherry :)))

Sherry, I love vocal kitties. All of mine talk but this guy in the puzzle is my most talkative. I can almost hold a conversation with him. Of course, neither one of us knows what the other saying but we talk anyway. lol Poor Pebbles must have been lonely with Rocky gone.

Until her last few years, Pebbles hardly made a sound, she was much more vocal after Rocky died, and she literally velcroed herself to me...I can't believe how close we became...really a surprise to me because the two of them spent all their time together until the last year when Rocky got sick, and I never questioned it, and then suddenly, it was usually just the two of us, and she talked to me nonstop, and suddenly I realized she was purring a lot, just never heard her talk before and her meows were always so quiet.

But Rocky was a lawnmower...and he was always so happy and purring a lot...waking me up a lot...just a happy personality...actually more like a puppy sometimes, ran up to the door to greet whoever was coming in, always walked people to the door to leave...yeah, it's time to adopt again... so seriously, is your husband secretly spending time doing a lot of petting while watching hockey these days??? ... Sherry :)))

jyl, I couldn't resist the pun. Pukah is also my kitty that purrs the most. :-)