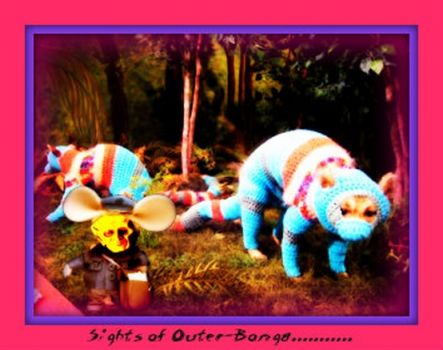 Strange as it may seem, I often get lost when delivering mail to the more remote regions in
Bonga-Bonga...........Yesterday was one such occasion, and I found myself face-to-face with the
rarely seen 'felinus crochetus bugosii' more commonly known as 'the warm pussy'.......
These wild animals are unique to Bonga-Bonga, and legends abound regarding their origin......The
most common being that there was once an abandoned woollen mill in the area and the warm
pussies made it their home, surviving the harsh winter by feeding on the balls of wool therein......
over the years, evolution saw to it that the pussies came to be born enveloped in a colourful skin of
wool, and, though all the balls of wool have long since been eaten, the survival of the species is
assured, as they simply feed off each other........
Isn't nature wonderful?.......
Created by lelabugosi Published 4 November 2013

come to think of it maybe there is a Homer one who runs round shouting "Eat my shorts" maybe it's a kind of foreplay for newly weds. do they knit each other, or make pompoms, I am only asking these things because it is my exercise time and I am putting off the evil moment, but here goes.

these little critters beat the pantsoff the ones that crawl all over jigidi (maybe that should be eat the pants off). I put eight of them up today. I should be smacked.

Smut - who talks about smut?? I thought about the Animal Organizations!!!

What? Smut is only in the eye of those who look for it. We are merely discussing the warmth and desirability of these delightfully warm pussies. Wouldn't want one of my own though, it would be like being infested by giant moths. My new teddybear sweater would be the first to go. Winter drawers on and all that. Sorry I misunderstood Miss Also thought for a moment you were into horticulture. I look forward to more interesting fauna from Bongabonga's backside

Don't mention it gglady, it's exactly what is wished.....

Sooo, I just missed Mr. Slime Ball. Where ARE those crack shots when you need them? I'll poodle-tip him as soon as I catch up. Perhaps I'll take up kick boxing next week!

Lela, take your hands out of your pockets and wipe that silly grin off your face...it is unbecoming in a leader!

The weather just turned cold last week. I would love to have a warm pussy on my lap. Heh ...heh...cough ...wheeze....

No, no, no sweet miss Junee. I meant Gawldarn talking about the gardener and sodding was boring not 'warm pussies' and 'wooly balls', though I must admit I am not well versed in 'warm pussies'. :-D

sorry you find pussys with woolly balls boring Also. I have lots of yard work you could do if you fancy a change

O dear Gawldarn probably the least offensive word in the vocabulary of the average three year old these days. there may still be a damn and blast society around but for about 50% of the population anything goes when things go awry.

Have we been reported yet?

Oh GREAT! I just get back over here and we've gone from talking about 'warm pussies and wool balls' to yard work. Borrrrrring!

Okay seeing how there seems to be a lull in the action here and seeing how this page seems to be already pretty badly sullied this might be the opportunity I have been looking for to get some things straight in my own mind. Several years ago on my debut tour through Europe I had a wardrobe assistant from England. Her name was Esme and she was quite the handful. We spent many hours together in the dressing room chatting about differences in American and British speak. I asked her what was the very worst, most horrible, socially unacceptable word used in England and she, without hesitation said 'bloody damn it'. She went on that adding 'bloody' to anything increased the shock value by at least ten fold. I laughed and asked 'bloody damn it' is the best you've got? Esme thought for a moment, began to turn red and said there is one other but she dared not speak it. I handed here a tissue and my eyeliner and asked her to write it down. She agreed and quickly and cautiously wrote down the words 'SOD IT!!!!!!!!!!!!!!!!!!!!' Well it wasn't like I didn't hear that word all the time. Every time I asked my gardener what should we plant over here he would always reply 'sod it'! I thought he meant transplant grass. Anyway exactly how bad is 'sod it' and is it still an unspeakable word today in England or has it become archaic?

I wouldn't want to witness a contest between Roger Bugosi and the Pee Squirt as to who is the most immoral and illegal. The slime would be flung every which way.

I've heard about that thing

He's probably at CL's house. He really has a thing for her you know.

Does anyone, but me, wonder why we've not heard from the infamous P_squirt....does anyone really care.......But I can't believe he isn't here with his innuendos, insinuations, ambiguities, and allusions.....and gawldarn sent him a personal invitation............

Yes, Juneee is right - they would eat anything made of wool, so you would have to watch what you were wearing......

Next time you have to go to the remote regions of Bonga-Bonga, please bring back a pair of the 'felinus crochetus bugosii'. I like Juneee's idea of having them to keep the feet warm!!
Thanks Lela!! :))))
(time, 2:18)

dear me no GGLady, KBoy lives with SLOG and he never got into any part of my bed. thinking it over those pussies would probably just eat my lovely bright pink bedsocks.

gerdje...there are a lot of "naughty" meanings in this story and the comments... :)))

Yes Hanne , but : without any connection to this Story !

can I buy a mating pair to keep my feet warm in bed?

I can't answer that question, precious-pebble, as I'm not reading this......

Sure glad that I haven't read any of this!

So if all of the wool balls have been eaten how do they propagate?

Good evening, beautiful ladeeeees!
What a lovely image of Bonga-Bongan wildlife........but what is that mousey thing in the foreground?....Looks like something you'd put on a key-ring, to me...........

Granny-furniture-chomper-not-chomping....... "when the experiment went awry, they were transported to Outer Bonga-Bonga and released in the hopes that they would not/could not survive"...... And why would we have done this?.......Surely we would have made use of the wool and disposed of them some other way......In which case all Bonga-Bongans would now be walking around in woolly booties, wearing multi-coloured-mittens, striped scarves and bobble-hats!......Please try and work things out rationally, before jumping to ridiculous conclusions.......

Don't bother gawldarn. I'd feel compelled, against my will, to explain the expression "feed each other" in Portuguese if so.

Not to worry Tatinha I have just the man to explain 'warm pussy' to you!....... OHHH PSQUIRT?!

For those of you unfamiliar with B.A.R.F., here are two examples of the experimental atrocities that at one time were experimented with......

AHA!!!!....I knew I had seen these Evolutionary Mutations once long ago....they did not EVOLVE from feeding on "balls of wool"....but were GENETICALLY ENGINEERED at the B.A.R.F....(Bugosi Animal Research Farm)......

Obviously when the experiment went awry, they were transported to Outer Bonga-Bonga and released in the hopes that they would not/could not survive....proving once again that truth is stranger than fiction and nature is stronger than experimentation......or something, maybe............

Doubting-Hanne-with-pipe.......Our postal system works like clockwork - we just have to wind it up now and again......Thousands.....hundreds......a lot.......quite a few letters get delivered every day......even yesterday, though I got lost, I successfully delivered a letter, and even though it was addressed to me, it still counts!

How practical!! Like the old Norse gods that lived from the same pig and the same Billy goat for centuries or how long people believed in them!! About delivering letters - ARE they delivered ever and to whom??? - not necessarily the names on the envelopes? - if there ARE any names at all...... It's really no use, is it, they can't read anyway - can they?? Whom by the way.....

well I'm darned glad you sorted that out before I went to bed, I could feel the nightmares coming on from here.

Fear not, faithful and faithless followers.........The warm pussy is no carnivore!.......They simply feed on each others woolly coats, which then grow again, so they are self-sufficient.....sort of......

I've read but I can say I hadn't got it and I'll be believed 'cause my English is not so good. Indigenous that lived where I lived use to call white man - 'Jumping Food'. They ate the entire Sardine Bishop squad at once among thousand of others. I got that 'feed each other' part, for sure.

I was trying to pretend I didn't read that, June.

simply feed off each other???

You must have felt relieved that they didn't associate those Mickey Mouse/Topo Gigio ears with food, Lela.

You might want to consider investing in a GPS to keep you from getting lost continually while delivering mail. As it is, it's a miracle that any mail gets delivered there. Ever.

Well, I don't think they would be very effective as a mouser.....but they would do wonderfully well against the dust bunnies under one's bed.......

I'll bet if Charles Schulz had added a companion volume to his "Happiness Is A Warm Puppy" book, about these furry ball-eaters, it would have been a best seller, especially in Bonga-Bonga.......