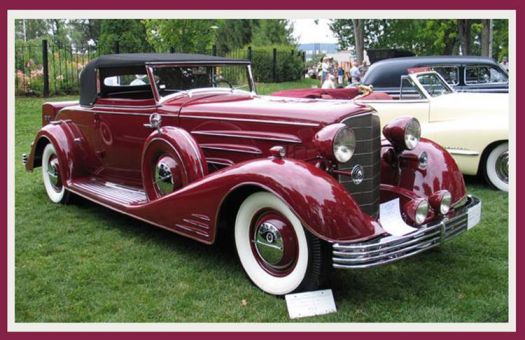 Created by Mischa95 Published 10 August 2020
Why this advertisement?

dj, not a million but maybe 1 -2 hundred thousand. What the heck, we can sell one of the hangar cars.
Mary, would that I could...

Thanks Miriam for it was a good read.
In my mind I seem to compare the V16 to the Ford 460 V8. almost same displacement with probably pistons half the size because there are twice as many of them. ,,,, but like my '74 Mark Lincoln after all that decompression junk regulated by the government, ,,,, it also only had 200 hp. still about the same as the good old V 16. ha ha.
As for that V12, well to me I see it as two slant straight 6 cyls married together. We know that a straight 6 cyl doesn't need any crankshaft counterweights, because it is naturally balanced on it's own. With a 6 cylinders, two sets of three pistons set at 120 degrees makes a perfect 360 degree balance, all on the same plane. That's why the Jaguar has such a good engine in it's XKE straight 6 cyl. ,,,,, Chevrolet saved a lot of steel with their use of the 6 cylinder for so many years. Henry Ford was just a stuck in the mud stubborn.. ha ha.
Pat.

The angle of the V changed in 1938 and various other changes resulted in :
The V-16 "Series 90" and V-12 "Series 80 and 85", were essentially merged for 1938 with the introduction of the new L-head V-16. The 431 cu in (7.1 L) engine was an in-block valve (i.e. flathead) design, and featured a wider 135° V-angle, twin carburetors, twin fuel pumps, twin distributors, twin water pumps, and a nine main bearing crankshaft (compared to the OHV V-16's five bearing crank) and produced the same 185 hp (138 kW) as later versions of the original V-16 with even greater smoothness and endowed the '38–'40 Sixteens with the swiftest acceleration of any car in the world at the time regardless of weight[citation needed] as well as slightly improved fuel economy over the OHV V-16 cars. This engine was nearly silent at idle and exceptionally smooth in operation. The wheelbase was reduced to 141.0 in (3,581 mm), the body remained 222.0 in (5,639 mm) in overall length. The "Sixteens" (as Cadillac referred to them) were basically series 75 cars with the new V-16 engine although they differed from the firewall forward from the V-8 cars and had several other trim differences. The instrument panels were identical to and changed yearly with the V-8 cars from 1938 to 1940. Only the '38 Sixteens had a horn button which had "Sixteen" in art deco script; the '39 and '40 models, like the V-8, had the Cadillac crest on the button. Three hundred fifteen were sold in the first year, 138 in the next. The production of the 1940 models ended in December 1939.
I can attest to the '38 engine, powerful, quiet and fast.

Man that is a lot of cylinders. Wow. That is like two V8's. Think about it.
I do think that it actually had real little pistons, just lots of them.
Pat.

What a beauty! I could drive that in a heartbeat and feel like a million dollars! (But then you probably would have to be to own this!)