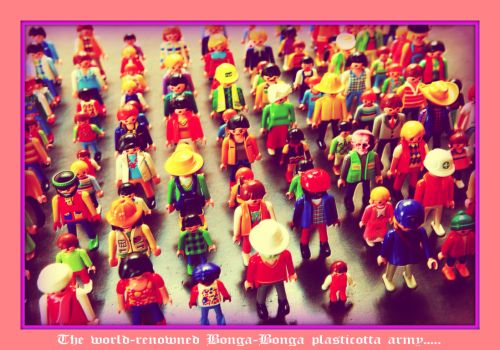 The Plasticotta Army or the "Plasticotta Warriors and Horses" is a collection of plasticotta sculptures depicting the armies of Basil-Basil Bugosi, the first Emperor of Bonga-Bonga. It is a form of funerary art buried with the emperor in 210–209 BC and whose purpose was to protect the emperor in his afterlife......

The figures, dating from approximately the late third century BC were discovered in 1974 by local farmers, while hunting for tadpoles in a Nether-Bonga cesspit.......

After a rigorous cleansing, they (the figures, not the farmers) are now on display outside the toilets next to the Oils, Lithographs, & Drawings section of the Bugosi Art Gallery (O.L.D.B.A.G.), where they can be admired by the world.....
Created by lelabugosi Published 1 February 2016
Why this advertisement?

These little beings are harmless to you, Sharon, except that they are gathering intelligence about you, your habits and movements. This they report back to the Command beings, whom nobody ever sees. When the time is right the Commanders will send in their Warriors. You'll know when you see the first Warrior, because he will kill you.

All this and more has been laid out for us by Niven and Pournelle in their fascinating novel The Mote In God's Eye.

Sharonnumbers......I think you will be alright - as long as you give your grandson ANYTHING he wants........

Sounds like the start of a coup to me

Question--my grandson who lives with me seems to be amassing an army like this. The largest contingent seems to be on the coffee table but some scouts show up daily almost anywhere. Am I in any danger?

Yes, Bonga-Bonga is justly proud of its cultural heritage..........

Except that Churchy is on the loose!

Wicca is grounded and not going to any parties. It is that time of year again. She is in "birdy-heat" and is confined to her cage. I could say she has a lot in common with Church Lady right now.

Thank you Mike's Second Wife, your heartfelt sincerity shines through like a glorious beacon in this otherwise emotionally bleak place we call Bugosiland. Bless you!

Funny you should mention that fellow, gemmeee! Ray Danton was a distant older relative of mine, and as I grew up people would often remark, “Oh Pat, you’re so handsome. You look just like your cousin!”

Lelabug, I slap myself on the forehead! Indeed I DID leave out the "e" in adpoletay! No wonder you couldn't translate, because I know you're a sharp international type of man who should have been able to understand pig latin. My apologies for the awful blunder.

CHURCHY! MY, MY! Secrets, dear, secrets. Many, many, MANY are the things I could reveal about you, but my lips are sealed (unlike yours).

I can assure you that is not a recent picture!

Much better to look at than his old one

I think Day Ranton would agree with you, mike's-second-wife. ;)

Or fly up his left nostril and into his head - plenty of empty space there to hold a party......

And you could use his hair as a ready-made nest.....

I thought it was finally time to COME OUT from behind the avatar masks I've been using over the years, and give you a look at the REAL ME!

Sheeeesh! Who am I dealing with here, a bunch of foreigners?!? "Ixnay on the Adpoltay Ineway" is pig latin for "Nix on the Tadpole Wine!"

Any true American would know that! In pig latin you take the first letter of the word and put it at the end and follow it with "ay" pronounced as a long A, not as an I. Sheeeesh!

Wicca darling, I'm afraid I have the whole place covered over with camouflage netting, so it can't be seen from aircraft or by the government's death satellites. However, to accommodate you I will put a statue of Barack Obama out in the open. Since you're SUCH AN EXPERT at pooping on statues, you'll be able to locate my place that way. Oh, and please go ahead and use the statue any (ahem) way you please on your way in.

I'm still trying to figure out how to get there since I am flying in. What does it look like from above? Google map is no help.

You're right, gemmeee, if I don't tell Churchy "no animals" ahead of time she MIGHT bring something with her, and she'd SURELY be disappointed if she came empty handed.

A taret is even better! If the rest of us dress in camo Roger'll never know what (who?) hit him! We'll tell him Target is interested in a merger and would be delighted if he showed a positive interest in expanding his emporium...

P.S. Please tell CL that NO animals will be present!

Coffee YES! (No Starbucks, of course, since Jigidi took away our stars.)

Roger can come dressed up as a bullseye.

Can everybody be here by next Monday? That'll give us the whole week to party. The cops never come back here. I think they're afraid of the rattlesnakes. Game wardens once in a while, but as long as we're not abusing any animals they'll leave us alone. "Roger dressed up as a duck" might be problem after all.

Will there be any coffee? Charbucks perhaps?

Can Roger come dressed up as a duck?

Churchy will be the only nun.........if she dresses up in that costume! Which I love it when she dresses up like a nun. Or a nurse. Or a, well, I'm getting off the subject, which is the SHOOTING CONTEST! Yes, I'll set up a nice easy event everybody can enjoy. No machine guns or bazookas, no exploding targets, just easy shooting and fun, fun, fun. I have plenty of ear plugs for everybody.

Hmmmmm, two problems, though. If there's shooting there's no drinking. Not until after we're done shooting anyway. I don't know if everybody (or anybody in this crowd!) can hold off that long. And no tea. Tea drinkers will have to bring their own tea AND teapots. (I know, I'm an uncivilized savage, an infidel, a heathen in the wilderness.)

Let's have a shooting contest - I've never tried... would be interesting...

SURE! Party at my place. Directions:

Take Rt. 93 out of town, go about 3.2 miles and turn left onto the dirt road. Follow for about a mile and a half and look for the gap in the barbed wire fence. Turn into the grassy field and find the shallow creek crossing. There might not be a track to follow because I don't go out much. At the creek DON'T STOP AND GET OUT FOR A DRINK because there's a nest of rattlesnakes right along the creekbed there. About a half mile after you cross the creek there's a copse of trees and underbrush. Follow that around to the right and there's my place! I'll be expecting everybody!

Count me out then! I've heard about tea parties from Alice...crazeeeee!

Perhaps he is hosting a Political Party.

Sounds great! Under which table is it being held? Has SLOG heard about it yet? And oh...is it a costume party...or is psquirt just returning from a visit to Church Lady?

Well, Herr Squirtz is rambling on about glasses of wine.....so I suppose he must be hosting a Christmas party.....

Did someone mention a party? Hic

You may have found the solution Hanne. Lelabug may just be lying about having glasses of wine, lots of glasses of wine. And of course the wine of choice would be that evil concoction, Tadpole Wine! All these years I HAVE PREACHED THE EVILS OF THE TADPOLE, but *no* y'all wouldn't *listen* to me, to the voice of wisdom, or to the voice of science.

So since we're all being three today, now you can choose which to believe - me, myself or Irene - or me, wisdom or science. ☺

Must be a pretty hard job to be up there - all those prayers going against each other... what to choose???? - go on holiday.. don't answer the phone... lie down and have a glass of wine... enjoyyyy...

Must be hard for him to find the time to bless America when he's so busy helping football players score touchdowns and actors win awards.....

Certain recent puzzles.....politics and religion, all rolled into one.........

WE may be all here but I think some of the others aren't quite all THERE!

And I tooo are here

How many am I?
At least three I think, Me Myself and I

Then we are at least seven... it depends on how many Lela is....

At least lady-without-a-pipe, me, myself and I are still here...

Let's hope not too many fathers...

Churchy going to confession? Do you realize what a logistical and planning nightmare that would be? Shifts of priests on rotating schedules, relays of bishops to supervise, alternate confessionals for the other parishioners to use, Hail Marys and Our Fathers galore!

I would challenge you to a battle of wits, but I see you are unarmed!

Yes, nothing like a good night's sleep (after the sun's up), a fine dinner of southern fried catfish, and a few laps in the swimming pool at the YMCA! Bring it on, world! I'm ready!

A protein smoothie and 8 hours sleep you should be good as new.

AHEM! Er, AHEM! I am back. The last few days have been a pure DELIGHT! An exhausting DELIGHT since I'm a little out of practice, but the person (a gentleman never tells) with whom I achieved such heights of DELIGHT is, shall we say, NOT out of practice at all. Indeed, she practices all the time. Every day, and especially on weekends, and more so when there's a convention in town and EVEN MORE SO when the Navy's in town.

Fear not! We have a Plasticotta fire brigade on permanent standby.........and they are permanently underwater - just in case......

These Plasticotta Thingys ....how do they fare against heat and fire??? If they are protecting do they need protection ???

It looks like Squirty got derailed by Churchy......just sayin'

I think psquirt is actually WITH The Giant Garbage Bag!

The duel is off! I have been waiting patiently at 'Ye Olde Biscuit Shoppe' in Nearer-Farther-Bonga-By-The-Sea, for 23 hours, and my adversary has not shown up!
I therefore declare the honour of the deaf mhoots to be fully restored - and the brigand Squireen Shamus Aloysius O'Shaughnessy to be returned to the giant garbage bag of history!

I could bring all three!

I am on my way Pattycakes and I'll even bring my "uniform"...you know which one!