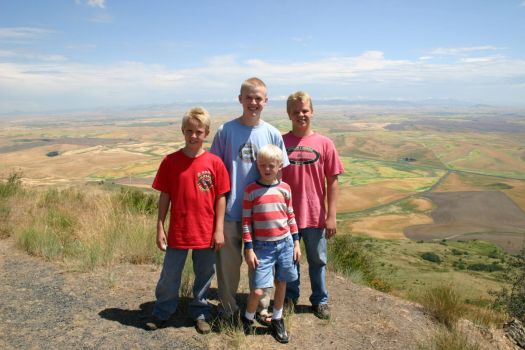 Thank you willey19live for that personal backstory. The rolling terrain of the Palouse region in SE Washington State was formed when an enormous inland ice dam melted at the end of the last Little Ice Age, about 10,000 years ago. An inland lake had formed as glaciers retreated north. When the dam broke, water rushed west to the sea, leaving behind silt that eventually was blown across the Palouse region to form the current terrain of rich farming land.

From the shadows, it appears the background is facing the towns of Garfield, Palouse & Farmington Wash. I was born & raised about 15 miles from this point. The top is @ a 4000 foot peak that rises over a half of a mile above the surrounding farming country with a 3 circular road that ascends to the top where an informative center is located & a nice picnic park is located at the base. I made many trips to the top before a road was ever completed, as a boy hunting rabbits & camping out. I was there when the road was bulldozed in three circles around this peak, in @ 1947/'48. A must see / visit when in the area & study the history involving the Butte.