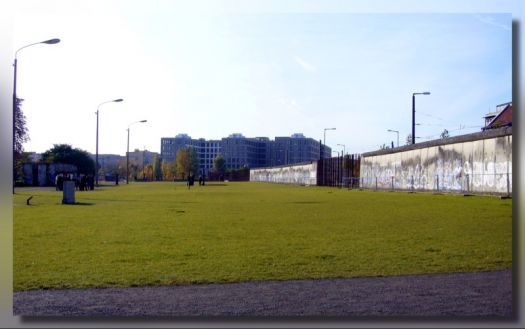 The Berlin Wall was a guarded concrete barrier that physically and ideologically divided Berlin from 1961 to 1989. Construction of the wall was commenced by the German Democratic Republic on 13 August 1961. The Wall cut off West Berlin from surrounding East Germany, including East Berlin. Wikipedia

Seemed like they never learned from the past Dean, what is happening now could even be worst than what was experienced during the Cold War. Welcome.

We stayed for a week at Holiday Inn, East Germany, Ardy. Walking around the eas, i still could feel the tension brought about by the past. The place seemed quiet and people unmindful of what was happening around. There is just so much history, the place needed a revisit. Welcome Ardy.

Was thinking about it Robbie.

Right Ank, still lots of cranes until recently, they are making a complete make over of the east. Welcome.

Initially, houses in East Germany were cheaper Jill, now they soared up high similar to prices in the West. Welcome.

Lunie and Didi, thank you for reminding of this sad chapter of history. Let's hope people don't forget and it won't happen again, the rest of the wall is a warning and memory ♥:))

I remember seeing this, Lunie. We were on a tour and went through Checkpoint Charlie into east Berlin. We had to line up by the bus when we came to go back and be checked against our passports before reboarding. What a relief to be back on the western side. In West Berlin there was a place where a tall platform had been put up that you could climb ( up steps) and see over the wall. There was a guard tower opposite on the eastern side. We waved at the guard there and he waved back. Must have been boring duty to have to watch the wall to keep easterners from sneaking into the western side. Thanks, Lunie & Didi. Many memories.

No Dil, The Wall was released in 1979 and the Berlin concert was held in 1990. @Dilubreuer

I was there a few years ago and they are still building. It's a sad part of history. Thanks Lunie. ♥♥♥

We had 5 days in Berlin in 1999 and the skyline was fill of cranes with new buildings going up on the East Berlin side. Thank you for this photo Lunie

It was so touching walking down this area where the wall used to be an important structure in Berlin, after watching a video from a museum in Checkpoint Charlie, (where I needed several sheets of napkin to dry my eyes, Robbie and Jacki).

Was the song inspired by the Berlin Wall Robbie? we had that album in cassette, long time ago. @porgy . Welcome.

Yes, I have even photos of wall fragments with artwork on exhibit at a park there, Jacki. Will look for it and post it in a few days.

And I knew a man who went over and photographed the artwork on the wall just before it was torn down. (Edward Murray)
https://www.berlinwallart.com/

Lovely set Dil, thank you. I watched the live show "The Wall" by Pink Floyd's Roger Waters and guest performers on British tv eight months after the Berlin Wall was taken down.