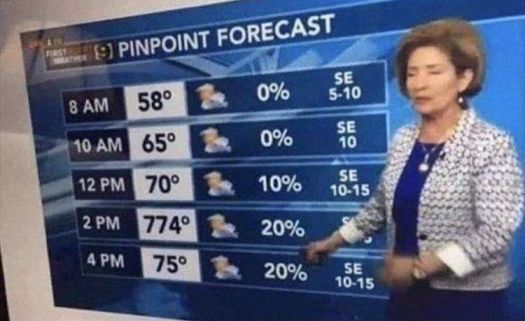 :::looking around innocently for the nurse:::

Gordon Benne(t). Wo' a load of ole codswallop!

I’m a sucker for accents. Maybe not the hockey player though. :-)

I can put on a few accents, Juba. Most people like the grinning hockey player with half of his front teeth left, the best.
"Hi mite not speek da best Hing-lissh; but whenn hi did, I did the best hi was!"

But no, I was in the English minority in Drummondville. I guess I sound just like New England TV announcers. Got bullied once or twice a month going home from school, until figuring out it's safer to stick with classmates on that 20 minute walk.
It was kinda payback for the English suppressing the French in Quebec for decades, but we didn't know that at the time.

Do you have a French Canadian accent to go with that Rob? I’ve been wondering.

French Onion Dip, no problem, made with French Onions imported every 2 weeks.

If we modify the tune just a little, we get
...And you'll look sweet
Upon the seat
Of a unicyle made for two!

Hoff,
if I should ever be so lucky as to deserve an invite...
French Onion dip please.

You can't even stand beside it and urine in it. Carol Burnett show -horse on the stage behind her) ;-))))

Tut. I just go when and where I want and no-one complains... normally...

Remind me NOT to swim in Hoff's pool...

Surely you have a cabana close to the pool. Take precautions.

Why one should not piss on an electrical fence. Buzzzzz..... Shocking.....

Every swimmer must be exposed to my sanitary sensor system. It may give you a mild electrical jolt should you let loose in my pool.

Why do you swim in my toilet?

As long as you don’t P in the pool.

I have had both my indoor and outdoor pool open since early April. If you are fortunate enough to get an invite to the compound, you are welcome to go for a dip.

Well it is now!! LOL

So is ROFLTIP a thing?

Enough cash could get it opened just for you, Ian. Be sure to wear a Hallowe'en or Venetian carnival mask to protect from envious neighbours.

Boy, how about this weather we are having

Choking is probably prohibited. You might have to leave Hoff's staff.

I figured someone would ask if I were choking. :-)

A fine homage to a Heinlein classic.

I believe he is merely grokking life.

Yes, at least we will know why Hoff has such a look about his face. What is Hoff taking, nurse? @Mischka

I’ll have what Hoffs having.

Is that Celsius or Fahrenheit?

You heard it here folks:

The beefier the better.

There is a 20% chance of rain. We could just steam some wienies.

The herd is all in position.

Best get the meat ready for the 2 PM grill time

I am afraid I cannot answer that question, on the grounds it will incriminate somebody other than me.

Rolls right off whose tongue?

hippo are you deathly silencing? Again?

Who here wants to test this hypothesis?

I am sure after a few drinks at the bar, she warms up a bit.

It's hilarious when the news programs string together some of the best bloopers and air them on New Year's Eve. They should do it on April Fools Day too.

Maybe a second ice asteroid? That would explain it I guess.

I bag "Polar macHumboltpenguinson" if there is going to be another competition...

I am told these numbers are correct.

Hades MacMephistophelesson DOES roll right off ones tongue.

Obviously a mistake. There is NO way the temperature can come back down to 75° in 2 hours, the have missed a digit.

On brighter news, there is a competition for naming the asteroid... I am going for Hades MacMephistophelesson, I think it has a nice ring to it, don't you?

I have no secrets Rob, just trying to behave in a manner TPTB dictate.

LOL (oh, sorry Hoff, was that supposed to be a secret too?)

As I think I have been banned from giving direct locations, especially in a state known for its man, I will have to say "Gee, Maddy, I do not know".

Or it could be on the 9th level of hell.

This is extraordinary. Is it in Florida?

I am just glad it only last for a short while.

Find a pizzeria with a walk-in freezer, make them an offer... then pray.