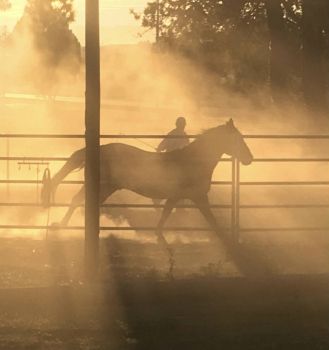 The man in this photo is getting his horse "legged up" for the roping season.

He's a heeler, which is one member of a two-person team. Their sport is called "team roping". The objective is for the header to catch the head of a steer and position him for the heeler. The heeler first keeps the steer aligned for the header, then must catch the hind heels of the steer. When they both pull their ropes tight, their time is recorded. If they fail to catch the steer, they're disqualified. Winners are determined first by making catches in all rounds, then by fastest time.

Oh, and that man exercising his horse is my octogenarian father!
Created by ElvisBanana Published 18 July 2018

Thanks for that info, Plumpossum. It's actually not too surprising, considering his theories. If humans can be controlled simply through rewards and punishments, it makes sense that he wouldn't believe in an emotional life for animals.

I bet he never had a dog when he was a kid!

Elvis, among those "disbelievers" was the famous psychologist B. F. Skinner who (if my memory serves) did not believe that animals had emotions. Thankfully, his views on the subject are no longer in style.
https://en.wikipedia.org/wiki/B._F._Skinner

If you've been around horses all your life, or even dogs or cats, you know that there are a special few who really stand out. You love them all, but have an especially strong connection with a few of them. That appaloosa was the one special horse for me. We were buddies, to be sure. At the end of his life, his teeth were no good, and he'd gone blind. I made a mush out of grain for him every morning and night, and would lunge him in the arena twice a day. It was an honor that he trusted me enough to exercise like that without hesitation.

He is now buried alongside all the others who have ended their lives at our ranch, but he certainly lives on in memory.

Hahahahaha! That's one of the best I've heard yet!

I always think that it would be good for the "disbelievers" to spend a week or two around horses, or dogs, or any other interactive animal. By "disbelievers", I mean those people who don't think that animals have feelings, can think or reason, and that they only act on instinct. That's the most ridiculous thing I've ever heard, yet that notion persists. If those folks would actually spend time with animals, they'd be amazed. Your description of your mare losing her nerve is a perfect example. That's a great description, and it demonstrated a personality trait unique to your horse.

That horse I spoke of, who learned that all flat places are not necessarily solid, had another good story. Actually, it's a better story with the photo, but I don't know what happened to the picture. As I mentioned before, that gelding was funny, because he was gawking about so much that he wasn't really paying attention to what was in front of him. Not only did that mean that I had to watch the trail, it also meant that he was unaware of other animals along the route. If a bird flew out of the bushes, he would get so startled that he would practically jump! We used to laugh that he was "afraid" of birds, but we have a photo of him tied to a tree with a bear up in the branches of the tree. Yes, that horse that would practically run away from birds was as calm as could be with a BEAR just above his head!

LOL! Awww! Like with "splat" falls--funny, but with empathy, too.
My fav lil endurance mare was always trying to challenge my best friend's very accomplished trail horse, but when we began training her to go point, she would lose her nerve and try to reverse
course. Funny.

That horse was an appaloosa, and he was one heck of a walker. He would walk as fast as many horses trot. My packing partners never put us up front, because we'd just walk away from everybody else. That was especially true on the way home! Whether in the mountains, or just riding near our ranch, heading back was a big incentive for that horse!

There is a funny story about him that doesn't really have anything to do with racing back on the trail home. The first time he went up to the mountains, he had to learn to be a pack horse. I have a good friend who is an excellent packer, so he took him for that first trip. Up and down and up and down the steep slopes was a new experience for that horse. When they got to a high mountain lake, my friend turned all the horses loose to go get a drink and cool off. The lake was covered with algae and plant growth, so it looked to my horse like the first flat land he'd seen in days! He charged out to that inviting "meadow" and practically ran on top of the water... for about three strides. Then, gravity and reality took over, and into the lake he went! He never did charge out onto a meadow again!!!

ElvisBanana, I get it! That's what my Arabian partners spent our time on:. pleasure and competitive trail. I was always comfortable on the trail, because I knew I could just drop the reins and my buddy would take us home. Do you think your window-shopper, as my best friend and trail expert used to call such horses, could get you home? Bet you'll say "yes!"

People always catch my attention when they use the word "appaloosa". My parents used to raise appaloosas, and I grew up with a barn full of them. They're great horses, and a direct link to the Nez Perce tribe. Even though we no longer have any on the ranch, I still love appaloosas. It is amazing to me that nowadays you can find them with no discernible blanket. Spots were always the hallmark of the breed, but apparently not anymore. I guess some things don't change for the better. Does your penning horse have spots?

By the way, you're right about Dad's horse. In recent years, he's only had Quarterhorses.

Oh, one last thing ~ congrats on achieving such a fast time! Look at that time, it's more than two minutes faster than anyone else! You should get a ribbon for that!

Personally, I just like to pack into the mountains. I have never done anything competitive on a horse, and prefer to be in the wilderness.

I once had a horse who was so interested in looking at the scenery that I (if I could, I would underline, italicize, and embolden the word "I") had to be the one to watch the trail. There are times where there's nothing but a sheer drop and a narrow trail, so SOMEBODY had to be paying attention! Still, I loved that horse, so it was okay with me...

Glad your quarter-quarter escaped HYPP! It's so ugly! I respect both penning, and riding/roping skills, but overall, I'm more comfortable w/ penning, as it's more humane with less chance of injury to ALL participants.

I've never done team roping, but I have done team penning.... and won a few smaller competitions. Your father sure has a nice horse there. Looks pure Quarterhorse. My penning horse (now retired due to a shoulder injury, was 1/2 appaloosa, 1/4 Arab and 1/4 Quarterhorse. He is actually a grandson of Impressive, but is free of the disease and is gelded.

I do understand your point, the life of rodeo stock does have its downside. On the other hand, if you're a steer in the U.S.A., you don't have many options. At least this way, you're well-fed and cared for, and your time in the arena only lasts for a few seconds at a time. Some steers get to where they charge as fast as they can, or hardly run at all. Those get culled out and lose their relatively easy jobs. So, considering the alternative, being roping stock isn't all that bad...

Wow! Two against one! Sure would hate to have to be the steer!