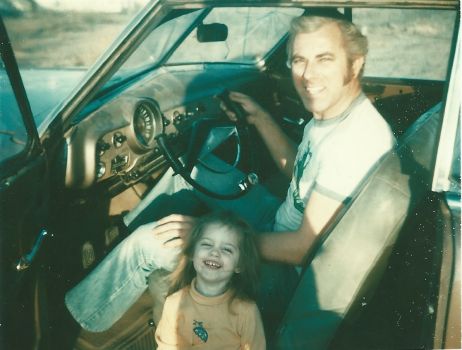 I sold the Baby Blue Victoria in Memphis. I drove this Bronze Victoria from Memphis to Tucson in 1980, and I pulled the Green Victoria behind a truck. This is my daughter, Rachel, and I cut the steering wheel to match one that I cut on my coupe back in '62. I still have this steering wheel on my now red Victoria.
Created by mr_51_vic_ss Published 6 August 2015
Why this advertisement?

I never did, but I have a friend that does right now, and it is a real nice car. I do think that they are about the same power, just advertising wanted to sell the V8's. Now about '53 the V8 was flathead and the 6 cyl was over head valve. ?? maybe even more power?? Ford was not going to tell you that. I do know that with the 6 cyl the radiator is further forward to make room for the engine, so the engine compartment was larger because of that. and.. the radiator only had one input hose and one output hose. making it much easier to change to a later model engine....

Did you ever have any of the 226 in-liners? I have heard they actually ran almost as well as the 239 V-8 and actually better than the 221 v-8 versions.

thanks ptv for comments make me think. I need to think.
the steering wheel is cut off the top so you can see the road better,,, if it was cut on the bottom it would surely catch my belly and stop me from turning.... ha ha...
I got stuck on the '51 Ford Victoria because, my brother, who was 11 years older than I, had one that he put a '53 Caddy engine in, and I loved that car. It was Hawaiian Bronze too. I got stuck right there. He got to see some of mine before he passed on.

You cut it on the wrong side.... They use to cut the bottom half off for what they called a fat man steering wheel......

looking very cool Pat....... thanks for sharing your memories!