It's a Jeep Thing 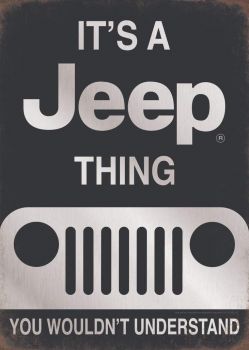 Created by triciab5581 Published 19 June 2021
Why this advertisement?

@triciab5581 - 51 & 55 yr old sons tried to get me to sell my 1993 red Firebird Formula V-8, too! Nope, 59K mi, I love That car, too, but cannot run in VT snow, hence Jeep! Automatic not stick, my USPS co-workers called it my 'Wus-mobile! Did your grand
mother give you that car?" Oh come ON, you're so jealous! I haven't chatted cars w/anyone in a long time! Fun, Tricia, thanks for writing! What color is sis's Carmaro?
My sons' dad had a 1965 maroon 'Vette when we met! He looked like Ricky Nelson!

And yeah, definitely no sun for me, either; I have horribly fair skin, being descended from a blonde line through my grandfather and a line of redheads, including my mother and grandmother; I never had a prayer of getting any functional pigment cells; DNA is unforgiving...

I said '98, but I misspoke; it was a '99. No Harley, but my first car was a '68 Mustang. At the time of his death in 2018, my father was still driving the Mustang, which he bought from me after I married, and fixed up. But now I have his Dodge Charger; my sister is a Camaro driver of long standing; so I suppose as vehicle ownership goes, we're not your typical family - her son and daughter have a Mustang and Camaro, respectively, while her son-in-law is an AF pilot and owns a Beechcraft Bonanza. We're almost afraid to ask what her grandkids will be driving, but whatever it is, it'll only be seven or so years from now....!!!

@triciab5581 - I made sure to get a hard-top, as well, with Vermont winters; plus, I don't do sun on skin, like ever....big hats, sun block, long sleeves! No top off the Jeep!
How's your frame? I had WaxOyl application twice, not wonderful, as I could see; but just last week, big thick black undercoating, to give me more years with my beloved vehicle! Sorry about your accident, but no one hurt, no real damage. I have had none.
SO happy to hear of someone, esp a woman, with a '98 Jeep! I rode a Harley for 30 yrs Any chance you had one of those? ;-) Sold it as I was lucky, never got hurt. Kathie

Mine is a 1998 Jeep Wrangler, gun-metal blue (the official manufacturer's color name). I bought it new in Littleton, Colorado, only a short time after the Columbine shooting in the same town; I worked in Denver for the State of Colorado at the time. It has only about 70K miles on it, most of those traveled while I was traveling between Denver and Colorado Springs each day for a time. It got a lot more bad-weather use that many, as I had made sure to purchase a Jeep with a hard top :-) As I'm now residing in Texas, I'm strongly considering adding an air conditioner to it, Texas' heat being what it is. At the moment, I'm also about to put a new fuel pump in the vehicle; that's the only major difficulty it has had, EVER. The only damage to it occurred when I and another driver met in a very low-speed fender bender during an extremely icy Colorado Springs night. The fender-bender only caused me a minor bit of cosmetic damage, and the other car only had a damaged headlamp :-) As neither of us could stop because of the (we later found out) unsanded ice, neither driver was dinged for the damage - no-fault enforcement is a necessity in a place like the Springs, with mountains AND ice...

OK, Chief, @chief_clerk - what do you drive? Love the response! haha
I was a mailman for 19 yrs, drove a right-hand drive little white Jeep! My son is 35 yrs UPS now & saw me in traffic once, said 'you looked so cute in that Jeep, Mom" that I decided to have a Wrangler for my winter car (summer is 1993 Firebird! red!) 58K mi

YES! I LOVE my Jeep, you must love yours! Leaf-green, huh? @HuvrLuvr - right, we don't sell; why should a stranger drive our beloved Jeep? How many mi on yours? Bought mine new, too, $17K, I think? Got So many years out of it, & it's not done! -Kathie

I drive a 2000 Leaf Green Wrangle Sport. Bought it new. Best car I ever owned. It certainly is a Jeep thing👍

TRUE! I LOVE this! I {still!} Drive a 1998 Amethyst Wrangler Sport & love it! Frame is rusting so I just had it super-undercoated, as it only has 39K miles on it, in the 23 yrs since I bought it new! My 50-yr old kids tell me to sell it; "it's a Jeep thing, and no, they don't understand!" I love waving, 2 fingers from the top of the steering wheel, to other Wranglers who are in the other lane! I smile! A Jeep brings a Lot of joy! Not selling! K