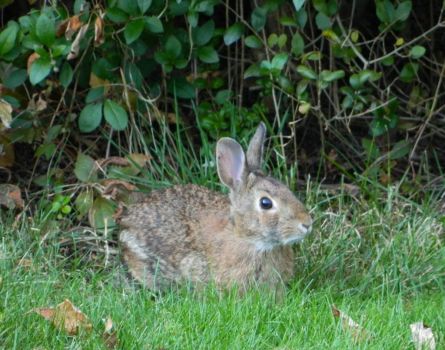 Created by david06520 Published 22 October 2012
Why this advertisement?

Thanks for sharing this sweet photo of Thumper Wabbitt, looks like he was posing for a calendar cover perhaps!
While working on jigidi this afternoon I've been listening (and singing along with) a CD I've not heard for a year, The Priests Harmony that came out in 2009. Surely you must be familiar with it & its glorious music? Although I know nothing (well, close) to Latin or German, in 2009 I listened to this album so many times, I've taught myself following the lyrics included to fake it along with the chorus. . . what fun!! One of my favorites is 'Bist Du Bei Mir'.
Thanks for taking moment to read one of my pastimes, David :)))

Hi, mariolyn -- ours don't change color for winter (I think!), but they do get white hair as they age just like the rest of us...

Hanne - you learned your lesson, didn't you? Nothing wrong with a freezer full of rabbit! Better than the house sinking to China!

Lelabugs, may that foot bring you more luck than its previous owner!

Ank, I think Micky would need longer legs to catch a bunny!

Plumpy, my good friend had a family of flying squirrels in her attic. One by one she trapped them and released them in the same wild spot. They got younger and younger until the last one, who must have been their grand-daddy!

Ah, Hanne - - that is the same problem I had with ground squirrels that were attracted to my sister's bird feeder. They tunneled everywhere, under foundations, in the garden, etc., and they even set up shop in my attic. It was a real struggle to get rid of them, but I seldom see them any more.

I like rabbits, Micky too. She likes to run after them. Nice game. They are muh to fast for her.

We had lots of rabbits once - first they were in cages, but then we removed the layer of concrete in a rather big area in one of the stables, so that the earth inderneath lay bare. We made some nice environments and put in the rabbits. And did they have fun!!! They made it into a dreamland for rabbits, dug and made caves, they had a really wonderful time until we found out that they dug under the foundations of the house and into the yard. Then we stopped the experiment and had lots of rabbits in the freezer!! Thanks so very much David!!

Aaaaw... Yours have no white yet.

I think they find their way back anyway, too! We used to release wood mice far from home and they had very distinctive markings. A week or two later we'd catch the same mice!

The food chain was brought home to me one afternoon when I was watching a mother catbird teaching her baby to eat bugs - a huge owl swooped by and took the little bird in one gulp. The mother bird sat on a branch for a few minutes clearly upset and confused. Then a fat moth flew by right outside the porch and the mother bird swooped by and took it away in one gulp. So on it goes...

I'll forgo that pleasure, Robbie. David, we have hawks here, too, but they don't seem to help much; there was one that hung around my sister's bird feeder a few years ago (he was not interested in the bird seed), but I only see them at a distance now, sailing on thermals. Even the increasingly common coyotes can't seem to make much of a dent in the rabbit population. I once caught a rabbit in a trap intended for ground squirrels, but couldn't bring myself to do anything with it except release it several miles away - - which I later learned was illegal. Tsk.

We need a kitchen exchange, Robbie!

Doglovertoo - we have hawks here, too, I watched one taking care of a fat squirrel one day. This rabbit just happened to be sitting just across from my back door when I had my camera handy.

Hi David, well you and I will not be popular with some folks but as doglover said, "that's the food chain!" I make it using white wine and make a rich stock simmering the bones in chicken stock. Paprika, salt and pepper are the only seasonings and onions, carrots and garlic are the only veggies. Meat off the bone, brown then braise it all in the oven for about an hour and a half. Delicious. I looked up Hasenpfeffer which looks really good, I'll try it sometime. Might help your problem PPM, but not sure if you would want to try it. Thanks mate.

But they're so cute. I only have 2 acres, but have lots of wabbits. I have seen too many of them killed by hawks - first time made me sick. I guess that's the food chain though.

Hee-hee I almost titled this Pesky Wabbit! I had fresh homemade Hasenpfeffer today (no relation to this visitor, however...).

PS: If I never see another wabbit, it will be too soon.

These little varmints have caused me enormous grief. I had to give up on trying to grow a patch of grass for my horse (after 3 years of intensive labor, much expense for seed, fertilizer, etc., and oceans of water. All it accomplished was to produce a flourishing rabbit population that hogged all the grass, leaving none for the horse. Grrrrrr!!!!!