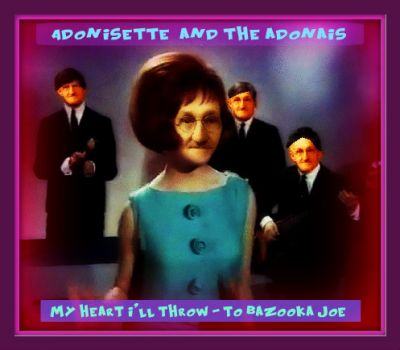 Auntie Adonisette tried to prevent me from showing this still from 'The Ed Sullivan Show' as she doesn't like to brag about her past achievements, but I believe our followers should see just what a talented gal she was.......
The song "My heart I'll throw - To bazooka Joe" caused a sensation when released in October 1965, and Adonisette, along with her back-up group The Adonais (Art, Andy and Anselm Bugosi) were mobbed wherever they went.........
The singing sensation soon tired of the rock n' roll lifestyle and became a shy recluse, sharing her
Beverly Hills mansion with her beloved tadpoles.....and that is why she never married.......till now.......
Created by lelabugosi Published 16 April 2013
Why this advertisement?

Nowt at all lad

must be the weekend getting at folk, seems a long time since we had a conversation with a whole sentence in it.

And what a blessing that would be!

The Bearded Dali (or is it Dolly) has been mistaken. The toupeeees don't need to be any bigger, just tilted frontwards would do fine. Or if placed over the camera lens they could be even smallerer. Also. As well.

You are SO right Juneee - the toupees too, very important indeed.....

Worst quartet of toups It's ever been my misfortune to espy. They need to be MUCH bigger to hide those hideous visages.

I'll leave it to him then, the wooden mountain is calling me to bed, first I have to do battle with the fearsome bathroom mouse. Have fun all

Let's beat all the superheroes, June, at once.
She threw them on The Avengers - now the whole world is in danger.
Only Uncle Adonis could save us.

thanks teamac thank you, not my words though. I'm a dog person too I just love every mangy mutt of them

Just think I'll wash the sock and give it back to you, Lela!! Do hope you can find the other one!!

I think "now the cat's a welcome mat" is my favorite refrain from your silly soliloquy. Since I'm a dog person and all, you see. Except for that mangy mutt Dogdaze.

Fox in socks,
our game is done, sir.
Thank you for
a lot of fun, sir

There was a time
I was the only one
And now I'm the sad and lonely one, lonely, lonely
Was I gay, (bzzz bzzz)
until today (bzzz bzzz)
Now he's gone and we're through

do
do
dooo wah

One time Alfred Hitchcock gave an elegant dinner party at which ALL the food was blue. He was a great practical joker.

Sock it to you! Another song from the Adonisette early album.
"Ole Sock, I return you to your owner.
Ole Sock, you went missing and were a gonner.
Then you showed up, in the bottom of a box,
Thinking all would be right,
But I sent you back in the middle of the night
To the one you left behind (or in front or near or on top of)
Cause I don't want you no more, No more
Ole Sock, I don't want you
No. No. No more!"

By the way. The photos'task is almost done.

gemmeee, I think you are right about the crystal!!

I found a pair of socks wrapped around some photos inside one of your shoeboxes. They're a bit rotten by moths and something blue is growing on them, I don't know what it is but it seems edible to me. I'll sent them to you.

Either that or crack all the crystal!

The song recommended by Tatinha will bring the house down!! A most stirring rendition :~))

For me it's just allergies

You just GOT it David, FANTASTIC!! Thanks Lela - so sweet of you!!

Will Adnosite marry in a church? If so. Can I suggest a gospel song?
'For Our Join' - Para a Nossa Alegria
https://www.youtube.com/watch?v=K02Cxo3fAC8

Will the boys reunite to sing with Auntie A for the wedding ?
That would be a fun wedding party :^)

But it BEAUTIFUL, Adonisette, "sniff" (where's my handkerchief?)

PSquiddy just slipped in a pile of
SH
aaaaaving Cream!!!

Keeping in mind the traditional, indeed universal sign of pawn shops everywhere, the three globes suspended on a bracket above the entrance door, I am reminded of an old American ragtime favorite titled "Meet Me Down At The Pawn Shop Baby, And Kiss Me Under The Balls" but that doesn't have a single dirty word or innuendo in it!

Can anyone help with Adonisette's five o'clock shadow before the wedding??

"C'monoveransitbymehoneybunch"......strangely enough (or maybe not), that was the name of another Adonisette song........It was the one that got her banned by the BBC, as they felt it to be 'obscene and objectionable'.........(It was a great hit in Outer Mongolia).....

I read your song yesterday, Partysquare and I've been laughing since then. What song is Adonisette singing at the wedding? Eternal love one, I suppose.
I think it'd be nice if you wear one of that Katish (the princess) hat, June!

Dear Adonisette, I've wondered - still about your teeth - you are so beautifully slim and tender, is it so that you just have soup and eat it using chopsticks?

I hope to wear one of my dresses, maybe red, and spike heels with a red feathery notion on my head, or in my head or wherever it takes my fancy

Thank you for asking, gemmy. I think in keeping with the moldy-lunch-meat motif announced yesterday, I should wear my pink tuxedo with the white piping. Of course, adhering to personal tradition, I will be wearing an Infantry Blue bow tie. No hat for at which to Wicca to take aim at (or something like that).

What are you going to wear to the wedding, chapter and verse (bookie-person and psquirt)? I think I would like to have a lovely, flowery hat...but with SLOG flying around, I don't think it would stay on long.

I remember the song well, and the wonderfully mellifluous hamoniazationing of the Adonais behind the shrill shriek of Adonisette's woefully untrained voice. If ever there should have been a one-hit wonder it was she, and she graciously covered her exit from the music scene by saying, "I'm tired of rock n' roll, and I vant to be alone. I'm shy. I vill become a recluse."

My heart I'll throw to Bazooka Joe,
the hero of Bastogne.
The Captain said, "Go get those tanks!"
And Joe went out alone.

He fired once, he fired twice.
He fired a dozen times!
And if he'd been a better shot,
They might have held the lines.

Did Adonisette shave her moustache too?

It must have been such an exciting experience for a young girl to see Adonisette and 'the boys' for the first time.........Anselm (playing the guitar), with his boyish good looks, had adoring fans swooning at his feet in those heady, carefree days.......

The Adonais should have had a make-over before going public. They look like their barber lives in 1940's Germany. Sure glad they don't have short black moustaches, too!

My grandmother told me about watching the Ed Sullivan Show on her little black and white TV and she saw Adonisette and The Adonais.....to this day our family, especially the children, have never fully recovered.