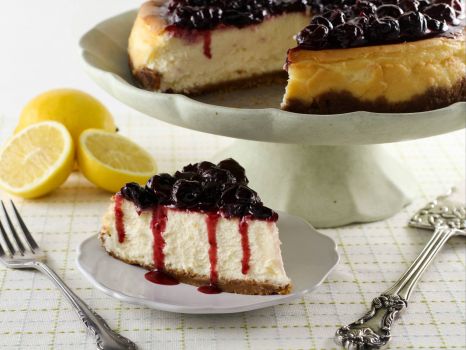 Created by th_counselor Published 20 January 2016
Why this advertisement?

In 1973 or ‘74 a team of American chefs traveled to Paris, France to enter the World Cooking Championships. Going into the end of the meal they were in a dead heat with the French team, tied for first place. This simple, exquisite cheesecake beat all the other desserts in the world and won the Gold Medal for the U.S.A.

Mix the dries right in the Pyrex glass pie plate, pour in the butter and mix thoroughly. Press with fingers to form pie crust. Press up the sides of the pie plate with thumbs. Form a high ridge all the way around. Refrigerate at least 10 minutes. When filling the crust, pour onto a large spoon rather than directly onto the crust, to prevent erosion.

It is not necessary to mix the filling until it resembles smooth pudding. Beat it on *lowest speed* until it looks like thousands of little bits of cream cheese swimming in a yellow soup. Be careful *not* to whip air into the filling.

Pour gently into crust onto a large spoon to prevent erosion. Bake at 350 F. for at least 35 minutes. It’s done when the center rises level with crust edges and loses its sheen. It’s hard to overbake this recipe, so if in doubt give it more time.

Mix until it’s a little runny, then pour on top of cheesecake. Bake 5 more minutes.

Refrigerate overnight to let the flavor mature. You’ll be surprised, this actually improves the flavor a whole lot. The top edge of the crust usually burns, which is why you formed it so high at the edges. Before serving crumble away the burned crust, leaving a perfect cheesecake. You can serve it just as it is or dust it very lightly with cinnamon.

If you want cherry or strawberry topping, go to the store and buy a frozen cheesecake.

**This recipe is NOT copyrighted. Feel free to share it far and wide!**

At 300 pieces, I think I'd starve to death before I could finish the puzzle!

LOL...I agree patsquire, but I still like fruit...preferably white chocolate and raspberries...so when ya gonna give that recipe up to me???

Wonderful puzzle. I'm starting it next. But I thought I'd share a laugh with you first. I have a recipe for an exquisite cheesecake which won a world championship back in the '70s. It is absolutely delicious. So at the bottom of the recipe I wrote:

"If you want cherry or strawberry topping, go to the store and buy a frozen cheesecake."