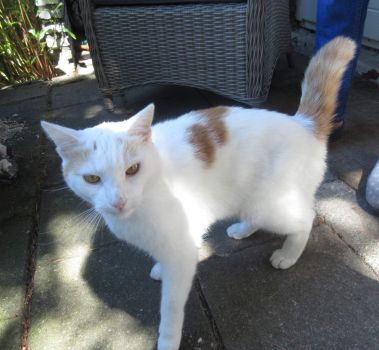 Dorus is the sweet kitty boy of my best friend. I was with her today and lucky for me Dorus was very 'homy' today. When I arrived he was on his bed. I greeted him and he gave me head bumps and purred very softly and I could take some (unsharp) photos of him as he rubbed his wet nose against my lens (now where do I remember this from?☺☺). Dorus has been sleeping on his bed almost all morning and when he finally got up he came outside with us where I could take some better photos of him. He's such a beautiful and sweet natured kitty boy!
Created by Impie Published 5 August 2020

Dorus has pretty eyes and I do love a contrasting tail colour Impie :-)

Hi Carol, please tell Payton that he doesn't want to have that 'beauty' spot on his nose, it's actually a little 'War wound' thanks to his nextdoor neighbour bully kitty! LOL

Thank you, Marilyn....I was happy Dorus was at home (he usually roams free). I don't know how, but I'll almost always have an immediate 'connection' when I meet a kitty♥

He does, Ella, thanks, his fur is nice and soft. I didn't photograph the 'bully' but he was at her kitchen door on her small balcony at the front. Outside he'll always grab Dorus, I think he can't stand him! He'll still sometimes come through the catflap and starts a fight in Dorus' own home sSo often my friend locks the catflap when Dorus is in, then he can have a nap in peace. I did photograph the bully's sister who had come through the open back garden door!!! I'll post a photo of her too, she's beautiful, but OMG....that voice!!! :))

Thanks, Nancy, yes he's really sweet....he's not wary of me at all. My friend is so happy with Dorus and he with her and I love that kitty too, he probably senses that :-))♥♥

Thank you dravale20, I think your kitties look lovely too! :)

bless u and your Dorus ! his eyes tells me ev ry thing ! peace and puzzle ,ok? Valentin hugs ya ! puzzle up Impie !

Hi Dorus! Delighted to get this update of you and your mum. You are looking sleek and well-loved. Awww, he gave you such a sweet welcome, Impie. :-)) ♥♥

Dorus is looking mighty fine! Sounds like he doesn't mind his neighbors dropping by for a little snack. Hopefully, he's made peace with the "bully" who lives nearby.

It is nice to see Dorus again. You must give out the "vibes" of being a kitty person to all the kitties you meet.

He does, Nan. Who knows??? Can you imagine.... Dorus was found on the streets with inflamed wounds on his back head and on the implant of his tail. He was in hospital for treatment for quite a while....but nobody ever claimed him????? They figured he was about 3 to 4 years old....he was spayed so he must've belonged to someone, but when nobody is searching or claiming and the cats are recovered they'll get chipped and put up for adoption. What ever has happened to him nobody knows. My friend discovered that Dorus is really terrified when he hears her pull off a piece of aluminium foil!

Hi, Dorus! Such a lovely boy you are! Payton says he likes the little beauty mark on your nose and wishes he had one! You and Aunt Impie enjoy yourselves!

I'm glad I could visit her too, GG and see Dorus again. He's really lovely!♥ I'm glad you enjoy both puzzles. I took quite a few photos, so I'm likely to post him again soon!:)
I went by tram, where wearing a mask is mandatory and we kept our distances in her home. She's not having any symptoms and neither do I, so we hope to keep going on doing well!

Right, Pammi, my friend has had several kitties, usually 2 or 3 at a time. Dorus is her only kitty now, although.... neighbour kitties also come through the catflap and make themselves at home and Dorus biscuits and treats! ♥♥♥♥

Thank you, Faye, I trust you to have bookmarked King Goofie too???♥♥♥

he does have a regal look to him. Perhaps he remembers when the Egyptians worshiped cats?

Impie, I think that's what it's all about when you have an animal to love. ♥♥♥♥

I'm so glad you got to visit your friend and her sweet kitty today, and happy to have 2 puzzles of Dorus to solve! Thanks, Impie!!

Thanks, Anne. We're not sure, but Dorus also has something of an Egyptian cat though his markings "almost all white and an orange tail" do also have something of a "Turkish" cat. He's not 'just' any cat that's for sure, but what breed he is, is unknown. All we know is that he's handsome and very sweet and indeed also clean! ♥

Yeah, Pammi, It was love at first sight, but she never could've dreamt that she was to take him home. It was awful that Blacky's life ended so sudden, he was her soulmate, but Dorus has brought her so much happiness again! ☺♥☺♥

Oh Dorus, you are so beautiful. Impie, your friend certainly made a good choice when she got this lovely boy. ☺♥☺♥

Hi, Dorus! You are really a lovely kitty-boy! He looks to have a "siamese" shaped head - that sharp triangle. He's very pretty and he certainly keeps himself clean.