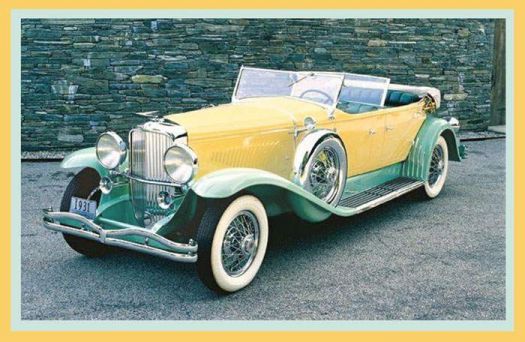 see comments
Created by Mischa95 Published 6 days ago
Why this advertisement?

It is a 1931. As has been mentioned before, nearly all of the Model J Duesenberg chassis were built in 1928-1929. When the chassis was purchased (in this case, likely 1930), it was shipped to the coachbuilder where delivery to the customer could easily be over a year. Most reliable Duesenberg sources - and the museum that currently owns it - list it as a 1931, although even some of their own literature says 1930. Confusing, ain't it?

Thanks, fyreline, for your fund of shared knowledge. And thank you Pat, for your contributions. I will not argue with Gary Cooper's colors, I just wouldn't use them myself (for sure). I will put a ? after the date as it is still in question, a little.

When entrepreneur E.L. Cord purchased the Duesenberg firm in 1926, he declared his intention to build the best car in the world in terms of performance and luxury. Many auto enthusiasts today believe that he succeeded in building the finest car ever produced in America. This car featured not only great mechanical engineering but inspired design and quality coachwork as well. This car is one of only eight Derham Toursters ever produced. Duesenbergs are one of the costliest and most coveted cars ever produced in America. They inspired the saying “It’s a duesie!”

Restored to its original color scheme of Primrose Yellow and Parkway Green, this car appears just as it would have when it was purchased by famous, Academy Award winning movie star Gary Cooper. Among the niceties Mr. Cooper would have enjoyed was an instrument panel that provided unusual features for the time such as an altimeter and service warning lights.

Mischa you are right about the chassis being built mostly all in '29 and bodied and sold for large sums of money by special body builders and titled for the year that they were delivered. I would also be very suspicious of the info on the photo... maybe they didn't see the license plate saying '31. I would also think the car is a '31. Not knowing all the details, but usually people put a license plate on of the year that the car is. So it would not make sense to have a '30 with a '31 plate on...>?? I'm not going to buy that.

as for the color. This color combination was used a lot, so it was probably a good selling point.?? If they sold, then they must have been desired. Just unusual. To tell the truth, in the early '30's there were just so many cars that were black or maroon... too many.
Pat.

gigidi, I don't know why. THere are many variables with cars built with custom bodies and in particular with Duesenberg where many chassis were built about 1929 and the the bodies were put on later. Generally, the car was classified as a 1930 if it was sold /bodied in 1930, classifed as 1933 if sold.bodied in 1933, etc. I could not find any other info on this car. Maybe @fyreline could answer.

What did they do to this beautiful car!!! This color combination is horrendous!!! :-)) dj

As they say, Pat, "there is no accounting for taste". I know if I had a Duesenberg, it would not be painted like this this one.
RickAgain, "interesting" is polite.

My '54 Merc Sun Valley was Yellow and Green? I thought it was not usual. I don't understand the color combo? Why? Maybe there is something I am missing? color combos from art class? I missed that combo.
Pat.