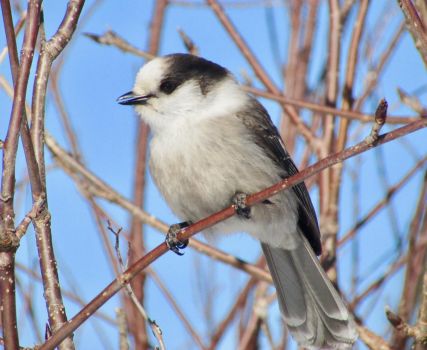 We hadn't seen our Whiskey Jacks for a couple weeks and thought they may have left us early like they did last year. But it looks like they were just on a little vacation. :-)
Created by nlmotel Published 16 March 2021
Why this advertisement?

Hi Mo, We haven't seen you for a while. I miss you and miss your puzzles. You okay? ~Patsy

lol@the birds pecking at the flapjacks! My Dad loves telling his story when he was at his hunt camp with his brother and buddies, and he burnt the breakfast bacon. Someone tossed it outside, and they all roared when one guy pointed and said, "Hey look! We finally found someone that can eat Bob's cooking!"
It was a Whiskey Jack. :-D

Thanks for confirming where you are, and where some whiskey jacks are. That flapjack scenario would make a great viral video.

We're in Vancouver but my sister is up near 100 Mile House and they have a few whiskey jacks there...although numbers have diminished over the last few decades. We no longer camp either...my mum used to tell us of when they were first married...she actually cooked over an open campfire and the whiskey jacks would be hopping from foot to foot in the cast iron frying pan while pecking away at the flapjacks she was cooking for breakfast! Faye ;D

@gemstone Thank you for the invitation. I know you're somewhere in BC and have looked for clues to find out where. I'm afraid my camping days are over, but I will make it across the mountains someday, maybe next year.

Fascinating bird. Calgary is at the edge of their range, so maybe I'll see one here someday. I was just reminded that I used to see them when we went to the mountains, and in one location they ate out of our hands. (They had figured out tourists meant food.) At that point I hadn't heard of them called Canada jay or gray jay, just whiskey jack. Now every time I see a photo of one, I look them up on the Internet and learn something new.