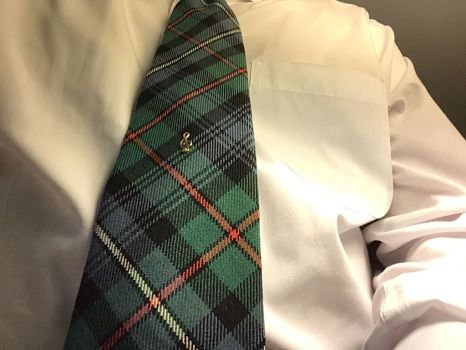 Today November 30th is St Andrew's Day which is a holiday here in Scotland. This Scottish Tartan is for Clan Robertson and includes the various family names including McRoberts. The choir that I sing with is named after the founder of the Festival of Male Voice Praise, James McRoberts so we wear the tartan tie in honour of him.
Created by Andrew2 Published 30 November 2019

Image copyright: I took the photo

That shirt is sparkling white but I should have asked someone to take the photo rather than try a selfie. I too was a boy soprano but no longer a top tenor, I still sing but now as a second tenor in our little all male choir. I have sung in choirs since school days and over the years have conducted three very different choirs. At one time I had a choir of young girls, and a male choir of thirty men from the church. I also for a short time conducted our church mixed voice choir. Yes I like choral singing.

@Andrew2 Delightful tribute to the founding father. Delightful as well is the cavalcade of 50 shades of white in the shirt.

What part do you sing? I was a child soprano and a tenor most of my adult life until neck surgery resulted in nerve damage to my larynx which lowered my range to bellowing baritone one. Admit to a decided lack of interest in choral singing.

Sally sings tenor in a 90-member community chorus with five concerts scheduled from now to Christmas. Its Christmas Concert is, as its 30+ year tradition calls for, being recorded Sunday evening for broadcast on Christmas eve on a popular radio station. Narration is provided by the station's on-air talent. The chorus performs additional concert series during its annual calendar.