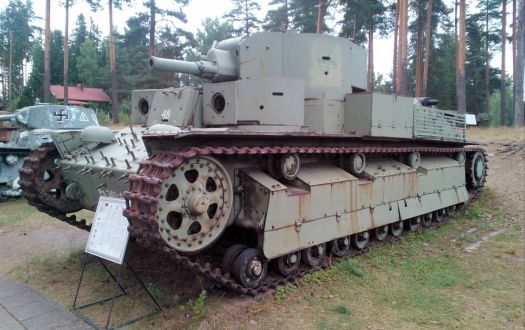 Thank you for the addition to your caption. Here in the US we know little of the Continuation War. Your information is very welcome.

Depending of the sources only 3-5 T-28 tanks still remains.
The same tank that is in the picture was used during the battle of River Tuullosjoki in 1941. Tank commander was Lieutenant Albert Räsänen who was also the commander of the Heavy Tank Platoon. Räsänen was awarded The Mannerheim Cross from his actions in battle of Tuulosjoki.
(The Mannerheim Cross was awarded for extreme bravery in the face of the enemy. The equivalent of the Medal of Honor.)

The T-28 was a Soviet design dating back to 1931. The design owed much to the British Vickers A1E1 Independent medium infantry tank; that vehicle was supposed to be secret, but Soviet intelligence obtained at least a general description. The initial production T-28A had 30 mm armor and a short barreled 76.2 mm howitzer in the two-man main turret. The crew of five included two gunners for the two auxiliary machine gun turrets. The tank was powered by a V-12 aircraft engine, powerful but flammable. Each tank had a radio.

The Soviets used the T-28 against the Japanese in the Nomonhan incident, and in the partition of Poland. During the Winter War, the T-28 ran into trouble against the Finns. Possibly as many as 200 tanks were knocked out, although many were repaired because the Finns had nothing which could tow so heavy a tank. Eventually the Soviets bolted additional armor on all three turrets, and adopted an improved gun, the L-10 76.2 mm /23, which had a longer barrel and some anti-tank capability. The vehicle shown here has been modified still further after capture by the addition of more armor plate on each side of the main gun mantlet.