Should We Be Concerned? 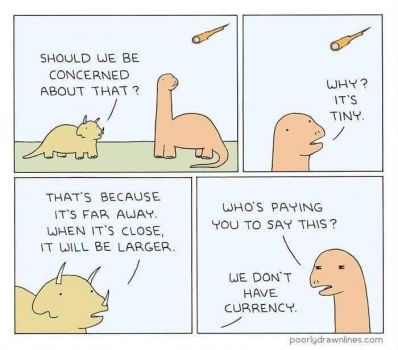 I guess the best way to answer this is 'yes'.

If climate change models are incorrect, but we make the changes they recommend, then we have spent a lot of time and effort making the world a cleaner, healthier place for our children and grandchildren to live in.

If climate change models are correct, and we do nothing, we ruin our planet not just for future generations but for countless other life forms who call Earth home.
Created by Mazy Published 27 September 2019
Why this advertisement?

You're not the only one to wonder what my point is.

I guess my point was for people to think.

There are too many people in high places who still do not believe in global warming. The horse and cart era was a hard but satisfyingly lovely way of life, everyone wouldnt need a horse as such a life is a self sufficient one, there wouldnt be the shopping centres etc to visit .....or am I missing your point altogether Mazy? Fay.

So we all join hands around the standing stone
And begin the dance of unwinding,
Pray for the moon to go down in the east
As humanity unmakes itself.

yes, methane is a problem, produced my dairy and beef cattle. Yes, horses would produce methane too. There are 125 million beef and dairy cattle in the US. Assuming ever American who has a car would demand a horse, that would be at least 280 million horses...

I have to say though that the implication the cartoon itself is making doesn't quite get there. There was nothing the dinosaurs could have done about the asteroid, so as an object lesson there are some gaps in the cartoonist's logic.

But wouldn't horse exhaust be as damaging as cows? Am I right that they are saying cows passing methane in unacceptable quantities is damaging the environment? I don't know much about this stuff.

If we have to go back to horse-drawn wagons, unlike automotive exhaust, horse exhaust can be recycled back in to plant life.

That's what I was thinking - running out due to gross overestimates of reserves.

well, I can only agree with that if it is SOON and we have underestimated the reserves of fossil fuels. If we run out because we use up everything we think we still have in reserves, we're all doomed :(

I think you're right about us being the impurities. We're a horrible, filthy, selfish, immature species.

The best thing that could happen to this planet would be to run out of fossil fuel.

Well, Jerry, we are indeed on the way to purging ourselves :( along with countless other species. But being in the Goldilocks zone (distance of earth to the sun that means liquid water, and therefore life as we know it, can exist) isn't proof of a planet's ability to return to a new balance and support some new kind of life.

The two planets closest to us, both terrestrial planets like earth, could have been earth-like - and life-supporting - in the not-too-distant past.

Mars too used to have running water and an atmosphere - what happened there?

And if Venus didn't have such high concentrations of C02 in its atmosphere, which make it too hot to have liquid water at the surface, it could have supported life as well. So what happened there?

Timing is everything! last week at an international meeting of astronomers in Geneva, a new and interesting view of what might have happened with Venus was presented*. Venus could have sustained a deep ocean of liquid water for billions of years, until a massive outgassing of Carbon previously locked in rock could have flooded the Venusian atmosphere and set up the circumstances for the extreme heat increase from habitable temperatures to the current hellish ones, caused by a runaway greenhouse effect. (Here on earth Carbon is likewise locked underground in oil, gas, and coal reserves, to name a few... until we willingly extract that carbon and dump it into our own atmosphere by burning fossil fuels. Yay, us!)

This human-caused outgassing could mean a runaway greenhouse effect could happen here, and send our terrestrial temperatures soaring to levels that can't sustain liquid water on the surface - something all living things need.

We don't know how much extra C02 we can dump into our atmosphere before the brakes are released and we have a runaway train we don't have the technology to stop. Because being in the goldilocks zone won't regulate our temperature if you dump too many greenhouse gases in our atmosphere - tip the scales of that balance too far it can become self perpetuating in making things worse. So I think seeing the planet's temperature regulation as an inherently stable system is dangerous. It's inherently unstable, if you upset it too far it will gain momentum and go farther, til it reaches a new normal - which could easily not sustain liquid water at the surface.

I'm not so sure I love the idea of a furnace - planet like Venus, infested with cockroaches (if anything could survive), as an acceptable version of self-healed :(

*this is a website I trust - it is a great resource for anyone interested in astronomy:
https://earthsky.org/space/was-venus-ever-habitable

As long as the planet is in the sweet spot with relation to the sun, it will be self-healing and purge itself of impurities. That is how it got to be the world it is today. If we are the impurities, we will be purged, and the planet will heal.