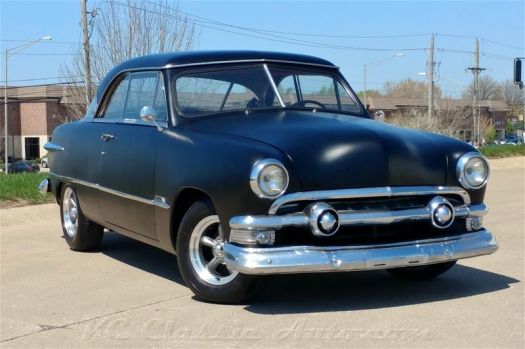 I hear you Spike, I won't do anything to my Lincoln Navigator... you kidding... not going to touch it. It has systems on systems, unimaginable engineering. cool car though..
But, I completely rebuilt my '51 Vic,,,, every last little nut... each piece gets full attention. I have worn out numerous wire wheels... I have been working on it for 10 years.
I just did a rear quarter window.... and looked at it... duh, left instead of right... ooops.. I have done so many jobs over and over 3 times. to get them right. I build it perfect and then just drive it down my dirt road.... how else are you going to get to town... ha ha... driven...
and yes a primer car is lots of fun... I love them that way... I just wanted to finish this one... not yet, but soon... maybe another year... ha ha.
Pat.

I agree Janica. There are many things I can not or will not try to do to my newer cars, but I have done almost everything on my '55 for 35 years, and pretty much everything has been done to it. The only part I couldn't do is build a new driveshaft; which broke as a result of my feet doing ill-advised things. (right foot to the floor as left foot side-stepped the clutch - a fairly common practice in many grey primer '55 Chevys.)

Spike I think my Dad kept some of his older cars because he could fix anything on them. Not like the new gadget cars.

Yes, Mr Vic and OldManMontgomery, the '51 Vic is a sweet ride. I had one for a very brief time in 1965 but sold it to buy a '56 Chevy, also briefly owned. Both are cars I now question my reasons for getting rid of, but if I hadn't I would not have the '55 Chevy I have had since 1983. Not quite as long as Mr Vic and his Ford, but a good run.

Old cars are frequently owned by old(ish) men ....... who else would put up with all the quirks and inconveniences of driving them? The new cars are so much better as all-around daily drivers.

My Dad had a 51 Mercury. It was a great car and I was sad to see it go. Dad kept it until it was worth nothing and then it appreciate to 300$. Then he sold it. I don't think any other of his many cars beat that Mercury.

I have too many expensive hobbies to begin another. Rifles, eating, books, ex-wives, clothing and classical music... Classic cars and a place to store them is beyond my budget.

I did once have a 240Z Datsun. Much fun but too expensive to properly maintain. I own a 2011 Red Mustang with the 'small' engine. It only develops 305 horsepower. Before I added the exhaust headers, cross over exhaust system and cold air intake. It gets me to church and back.

Never to late Montgomery,
I'm an old man too, and I have one... enjoy driving this old Victoria.
Pat.

Every young man - including me - wanted one of these in a certain period. They were cool. The movie 'Thunder Road' with a young Robert Mitchum didn't quell the interest, either.

I've never owned one. Rather too late now.

Great photo of a great car, Spike. Thanks.

thanks Spike for the nice picture puzzle of a custom '51 Ford Victoria with styled wheels and a shaved hood. They are so cool to drive. I like mine too.
Pat.