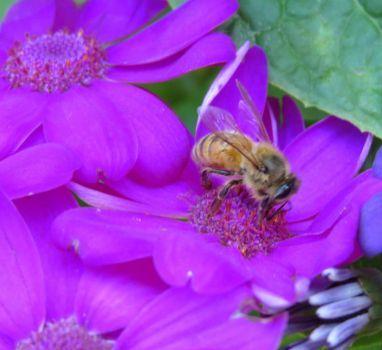 Thanks Barb, Sandy, Laura, smllpkg, Patti, Jana, Suzy, Dave, Nev & Beekay - I really appreciate all of your comments:)))) I still have a few more photos from the Parklands!!

Wow! That's vivid purple! Think the honey will be tinted purple too ;-)))

Think how many times those little wings would have to beat to carry that bee around. Every one of your photos are gorgeous, Robyn!!

Well...this is one exceptional photo, Robyn!

Well done Rob, thank you so much ☺☻

What a beautiful, vivid color of these daisies Rob, and the bee is an icing on the cake :)

My pleasure Lorna - thanks!!

Thanks Jacki - I left the dead-heading to the gardeners at the Parklands:))))

They totally ignored us Shirley - had too much pollen to collect:)))) Thanks!

Thanks Janet - they also have a new Native Bee hive at the Parklands this year - which was good to see!!!

Beautiful Rob, this one is a different shade to my purple African Daisy. You got a fabulous pic here. Thanks and hugs, Janet

Mr Bee is very busy going about his daily duties, not in the least worried about Rob taking his photo, Thanks Rob.

they are called african daisies els2. pretty easy to grow, often blooming for me even after a light frost. they do need to be deadheaded though.

There was pink, purple and blue daisies els2 - and they were all wonderful to see! Thanks!