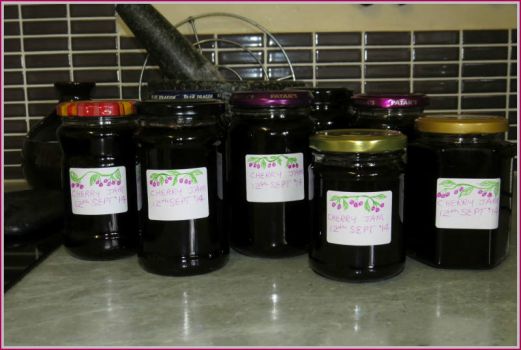 I found a 3kg can of cherries that I'd forgotten about in the back of the pantry - so I made it into 8 jars of jam!!
Created by robryan Published 12 September 2014

It goes very nicely on toast with cottage cheese Ami:)))) Thanks!!

It looks so good, it's making my mouth water!!

I was more worried about it setting Janet - and not sure if I had my ratio of fruit to sugar correct:))) I only had a recipe for fresh cherries but it all ended up AOK!! Thanks!!

Pleased to hear it tasted as good as it looks Rob. hugs.

Thanks iri - the labels were just a bit of fun:)))

LOL!! Thanks Sandy - it tasted yummy on my toast too!!

Thanks Janet - yes, it went down very nicely - and I was just having a bit of fun with the coloured biros :))))

Thanks Beekay - we all enjoyed the flavour:)))

The one can increased to eight jars and those eight jars will multiply into hundreds of great pieces of toast! Great job, robryan!

Yummy! Wish I could join you for breakfast! Your jars look so cute too Robyn ☺

Sounds yummy, Rob. I hope it tastes delicious on your toast tomorrow. Yes, I like your cute labels too. Hugs, janet

OH cherry jam! One of my faves! And I like your cute little one of a kind labels!

Cherry jam is the king of all jams. Like the different labels too.

That looks so good, Rob! Let us know how it tastes - you'll make our mouths water!

That sounds pretty darn good Cathy:))) I was thinking of trying it on my toast in the morning:)))) Thanks!!