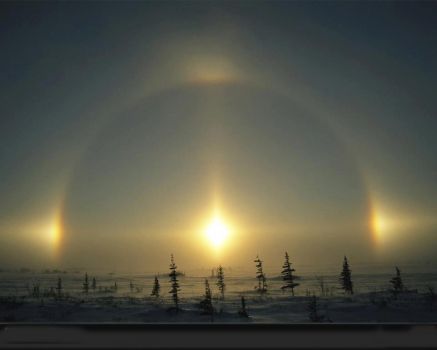 Created by SusieVortex Published 24 October 2012
Why this advertisement?

Well, I like what you produce with this camera, JC. And I think there are many others who would agree. So just keep doing what you do, and spend the $$ instead on gas to travel to other beautiful, educational little towns that you would like to "learn us about"!! :oD

You're such a NUT Lelabug!! You crack me up :oD

Well, if it is tadpole kind of green, that's NOT what they meant by GO GREEN!! LMBO!!

Is that "green atmosphere" environmental pollution from your tadpole wine factories, Lela? If so, don't you have a relative who can invent something to fix that problem?? Tsk tsk!!

-Lelebug, you probably get Sun FROGS, rather than Sun DOGS, in Bonga Bonga, no?

-SPDean, sun dogs only appear when the conditions are perfect: the sun is on the horizon, the perfect size ice crystals are in the atmosphere, and they are falling horizontally. If not, only the "halo" can be seen, not the "dogs" :oD

Another winner and keeper! Never heard of sun dogs. Thank you again for sharing and educating!

I can imagine! What kind of camera do you use, JC? You get some really good shots...especially your sunrises. I bet you could get a good sun dog...

Hey JC! Nice to see you! Who knew sun dogs could look so amazing, eh? Right up there with rainbows and Aurora! :o)