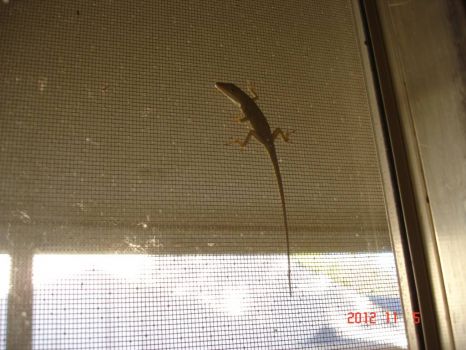 Created by texasstar7 Published 7 November 2012
Why this advertisement?

There was one last year on my back fence that was light chartreuse colored, and he'd sit there and blow a red bubble in his throat! I watched him a lot! You're right, they aren't hard to get rid of.

We have so many of these in our Confederate Jasmine vine. My little dog loves to catch them. I have to take them from him and put them back into the vine...can't stand to see him torment the little things. Don't really want one in the house but they are easy to catch...usually.

Cel, I don't want creepy crawlers for playmates, and I'm glad you can't catch them! And thank goodness they eat a lot of bugs, because I gave up the chemicals a few years ago. I've found these things inside the house more than once. At least one always manages to get inside each year. Thanks, Cel, Morris & David!

Looks like an Anole (Anolis) lizard to me - very sweet and friendly and they do eat lots of mosquitos for our benefit. They like to come in to the sunny porches and patios, too.

Not a very nice name for it, tex! They du eat a lot of bugs though!

giggles a lil ol Salamander? they are fun to play with.. if you can catch them

So then, you probably didn't name him. Nice shot tex.

I'm with you, PLG! Sometimes they scare me half to death outside when I start to move a pot or something and they jump! I don't mind them at all but don't want them touching me.

I think I'd prefer he stayed outside. :) I have nothing against them, but don't exactly want them in my house!

Thanks, everyone! I was amazed to see any of them with all that spraying they did for mosquitos in summer. But it didn't seem to faze these or the Monarchs either. So glad.

Your own living bug catcher!

Oh I think it's cute,But I guess you expected that from me!!!LOL

Glad we do not have these up here in Idaho.

He was between the screen and patio door and was non-plussed when I tried to scare him away. Can't say the same for my reaction!