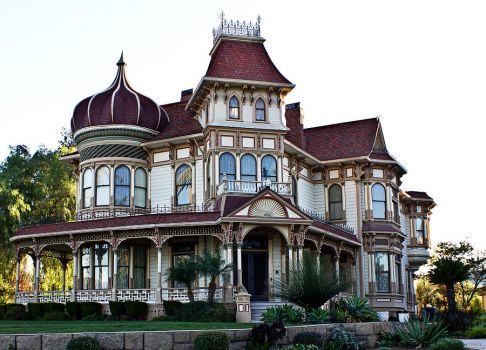 Created by nadloucha Published 15 August 2017
Why this advertisement?

When Janet Cosgrove was the owner of this beautiful mansion, my grandmother's wedding dress was displayed for a time. My grandmother, Madeline Jewell Bean, was born in Redlands, CA in 1903.

I cannot believe that this puzzle had 186 solves, and only two comments?

The house was built in 1890 by early Redlands residents David and Sarah Morey
for $20,000, profits from the sale of their citrus nursery. Following the Moreys' deaths
in 1901, the house's second owners were Willard R. and Nancy Cheney, the brother
and sister-in-law of Helen Cheney Kimberly, who was the wife of one of the founders
of Kimberly-Clark Corporation.[2] In the 1940s, it was reportedly owned by actress
Carole Lombard's uncle and left to her in his will, but she died before she could take
ownership.[citation needed] Shortly after, the mansion was purchased by Willard M.
and Florence Wiseman, and then sold in 1969 to Curtiss and Phyllis Allen. The Allens
owned it during the 1970s. Mr. Allen had seen the house as a young boy while in
Redlands; he told someone that he was going to own that house one day. A friend
told him it was for sale and Mr. Allen purchased it

The mansion opened as the first bed and breakfast in Redlands in 1985 under
then-owners Carl Ljungquist and Gary Conway. The house was purchased by
Janet Cosgrove in 1998, who oversaw renovation work to the building before
reopening it as a bed and breakfast in 2006. In 2010, Sara and Bill Taylor bought
the mansion for sole use as their private residence. In 2012 the house went into
foreclosure. In January 2014, ownership was returned to Janet Cosgrove.
You know why don't you? Guess.

I researched further and found This style of home is called Queen Anne,
and this one in particular has 4,800 sq feet of the most beautiful ornate
and eccentric architectural detail — enough to make just about anyone drool!
The Morey Mansion is very well-known (you can see why) and has been called
“America’s favorite Victorian Home.” It has been featured in movies, television
shows, and commercials. I will leave the dreaming up to you based on these
wonderful photographs! Enjoy!

So gorgeous don't you just love it.