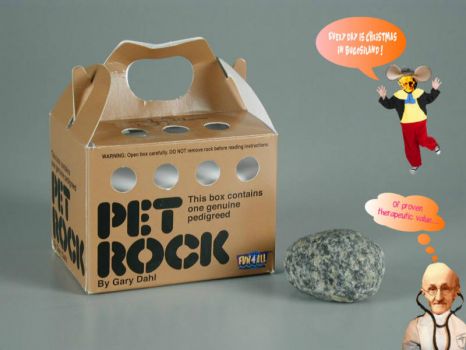 As it's Boxing Day, here is a box.......
Created by lelabugosi Published 26 December 2015
Why this advertisement?

The pleasure was/is mine!

TFS, your box of pet rocks.

Yes, the possibilities are endless .....

I used my training manual to teach my Pet rock to cook eggs :-))
https://www.jigidi.com/created.php?id=P0KBRW0Q

Well schist, this place is rock'n with all the stone joks

A lot of stones seem to roll away during the Easter period.........

I was crazy about rock and roll but my rock refused to roll!

I named mine Igneous, but he got Sedimentary and turned Metamorphic.

I was going to retort, "Speak for yourself, young man!"...but then that would be a contradiction of terms!!!

Mine became quite lethargic and the vet said it had hardening of the arteries.....so I had it euthanized and I buried it in the back yard.

Uncle Bluebottle will employ his powers of levitation on those mighty megaliths.

Mine has escaped......in order to find it, I shall leave no stone unturned.

mine didn't do a lot just sat there stony faced

Surreal_Heidi ... thanks for the funny comment ... you made me laugh out loud ! Good one !

Thank you. The visual was too much for me!

I am soooo glad you clarified that!

Dr.Adonis said that when he first showed it in public, it was petrified......the rock, that is.....

Let's hope they take each other out!

like world war two round our harbour with those darned things, Santa must have dropped a job lot down for Christmas

If you can fly a drone with a camera alongside you on your bombing run, I'm sure we'd all appreciate pictures!

I'm saving up for it.

Master Henry just told me he's going to put you on a barbecue, little birdie! I think you should poop on his head......

WE send you this cute little poem:

Roses are red,
violets are blue,
I'm schizophrenic,
and I am too.

Oh sure, "Dr." ABB probably got involved the minute he realized that "human interaction and compatibility, sometimes known as intercourse" was involved.

All very enlightening, of course. They also developed B.E.D.Sores, in an effort to eradicate laziness, while Dr.Adonis B.Bugosi himself introduced the B.E.D.Side manner, in order to treat patients in a caring, friendly atmosphere.......

Ah yes, the world renowned Bugosi Experimental Department.....inventors of so many wonderful things that it has been compared favorably with Bell Labs and even Thomas Edison himself. Where would we sleep if not for B.E.D.Rooms? I ask? Eh? And how would we cover ourselves without B.E.D.Sheets and B.E.D.Spreads?

These intrepid inventors also do research in the areas of human interaction and compatibility, sometimes known as intercourse, which has resulted in (sometimes strange) B.E.D.Fellows who make fine B.E.D.Warmers. Alas, they accidentally brought us B.E.D.Bugs one star-crossed night when they had evil visitors from B.A.R.F. (the notorious Bugosi Animal Research Farm). But they redeemed themselves in the eyes of many when they developed the B.E.D.Pan. WAIT! WAIT! What am I doing!?!?!? I think I'm descending into B.E.D.Lam! HELP!

It could produce lumps though! I could demonstrate on Roger. :)))

Our rocks will never breed, though if you drop one it will produce many little rocks.....

Are they good breeders??
Pure or Thoroughbred??

And he will never run away!

You can call him anything you like, he will never come.

Of course, there are many advantages in keeping a pet rock......They are extremely docile, eat nothing, make no noise, and offer excellent protection when thrown.......

I would call him Spot! Or maybe Bruiser!

I don't think your BEDRock is a purebred, it looks like an Igneous mixed mut to me, but they all do like to have their belly rubbed :-)

Bwaahaahaa Good one and so quick on the draw... Love the wit....

Yes, I remember. My son found a smooth rock outside and named it 'Rocky' - as Sylvester Stallone, Rocky movie. Thank you for the memory and for sharing.

LOLLLLLL Great blast from the past..Mom told me I could have a pet rock, back then, just go out side and catch one... LOLLLLLLLLL thanks for a memory almost forgotten...