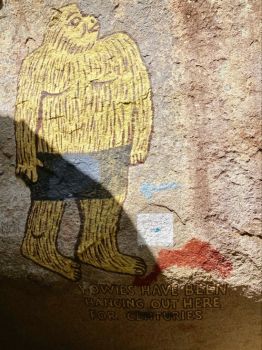 Created by Ms_Maddy Published 13 January 2021
Why this advertisement?

Howdy to the yowies, do you know how to yodel?

I had heard that the Yowie was rather small (1-1/2 feet tall), despite looking much larger in depictions.

Yowie is one of several names for an Australian folklore entity reputed to live in the Outback. The creature has its roots in Aboriginal oral history. In parts of Queensland, they are known as quinkin (or as a type of quinkin), and as joogabinna, in parts of New South Wales they are called Ghindaring, jurrawarra, myngawin, puttikan, doolaga, gulaga and thoolagal. Other names include yaroma, noocoonah, wawee, pangkarlangu, jimbra and tjangara. Yowie-type creatures are common in Aboriginal Australian legends, particularly in the eastern Australian states.
The yowie is usually described as a hairy and ape-like creature standing upright at between 2.1 m (6 ft 11 in) and 3.6 m (12 ft). The yowie's feet are described as much larger than a human's, but alleged yowie tracks are inconsistent in shape and toe number, and the descriptions of yowie foot and footprints provided by yowie witnesses are even more varied than those of bigfoot. The yowie's nose is described as wide and flat.

Behaviourally, some report the yowie as timid or shy. Others describe the yowie as sometimes violent or aggressive.

Looks like a cousin of Bigfoot to me, thanks Ms M. ♪♥♥♫