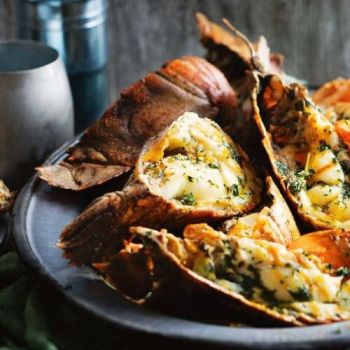 Thanks BB, I would eat this.

@mycat1
Thenus orientalis is a species of slipper lobster from the Indian and Pacific oceans. T. orientalis is known by a number of common names. The United Nations Food and Agriculture Organization prefers the name flathead lobster, while the official Australian name is Bay lobster. In Australia, it is more widely known as the Moreton Bay bug after Moreton Bay, near Brisbane, Queensland.

What are bay bugs? Never heard of them.

The Tiger is a great read.

Btw, they don't look green; does that mean, loike, young or unripe?

I've heard of witchety grubs, but these Bugs are new to me, and look fantastic! Any naturalist or wilderness expert will tell you that the reason birds and reptiles thrive so readily is that they eat insects, which are pure protein. Take away the butter (but not the olive oil!), and I bet the dish has about 50 calories.

@msbonne, you don't have to believe in witches. All that the world requires to be eerie is that others believe in them! And they make great antagonists in horror films!

I don't believe in witches.

The only insects of culinary repute in Straya are witchety grubs.

I would rather eat lobster than insects.