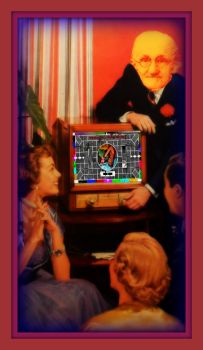 Created by lelabugosi Published 10 November 2012
Why this advertisement?

I'll have you know that I play a pretty mean penny whistle. Father O'Barloff says my rendition of "Jesus Walks with Me" (with stepped up tempo) is the best he's ever ha...uh...heard.

Hi Kboy, that's good dear, you keep yourself nice. Tell her to go bother some other guy and leave you alone. See you all in the sunshine tomorrow

Madam church person you have probably terrified Kaleidoboy, he has led a very sheltered life, I hope you didn't lay hands on his penny whistle

Both of them, oh my goodness!! Such talents here - impressing!!!

Has anyone seen Kaleidoboy? He hasn't been showing up for his private Bible study classes lately.

How appropriate you have enabled so many to view this priceless painting on this particular weekend, considering that uncle Adonis was wearing a poppy!!!

A native of old Bonga Bonga,
whilst dancing a wild snaking conger,
Was asked by his wife
Are you happy in life?
He said I could do with my ears being longer.

These beautiful lines were penned by Uncle/Sir Bluebottle......

Ohhhh, that will be unforgettable - I think!! Which one?? Anything Shakespearean?

End-of-your-tether.......His head is simply slipping after holding this position for two hours as the artist captured the moment.......(his neck varies in length from day to day, just as everyone else's).......
Yes, Hanne-with-pipe.....that is why our people are so fit....
Bubba-in-Bermuda.......The test-card gives the population a certain sense of continuity and security.......
was-shining....I am considering introducing a goodnight poem (read by me of course) for lights-out......

see, standing on your head isn't good for you

Good job right-side-up TVs were invented, so modern day Bonga Bongans don't suffer as Uncle Adonis has. Clearly all the upside down watching resulted in him losing his neck.

I think it's brilliant to involve some exercises in watching TV!! Then you at least do something reasonable!!

Well Lela, this certainly seems more interesting than most of the drivel they have on TV today!! Love the poem too June.

thank you Hanne, it's from Alice in Wonderland

Great poem, June, they should learn it by heart in Bonga-Bonga!

Who is in the test pattern?
Loved the poem June :^)

I think Father William must have watched a lot of tv........

puts me in mind of a poem - Lewis Carroll


"You are old, Father William," the young man said,
"And your hair has become very white;
And yet you incessantly stand on your head?
Do you think, at your age, it is right?"

"In my youth," Father William replied to his son,
"I feared it might injure the brain;
But now that I'm perfectly sure I have none,
Why, I do it again and again."

Well, Hanne-with-pipe.....What happened was that when we eventually started a second channel, many households bought a second TV.......one they placed in an upright position, while the other they placed upside-down.....they then alternated between sitting normally and sitting upside-down.....
Even today, it is not uncommon to enter a house to see the father sitting upright watching one TV, while the mother sits upside-down watching the other.......

They must be very healthy then, it's said to be very good for the brain to sit upside down or stand on your head. Did you ever think about the health situtation when it finally was turned??

Yes cakes........for a while (a few years) viewers would sit upside-down to watch in comfort......when the image was eventually corrected, some people were so used to sitting upside-down that they turned their sets the other way.....of course the ones that had already turned their sets the other way then decided to sit upside-down, so all in all it was a period of some confusion.......either the set and the viewers were upside-down, or they were the right way up......
Even so, the corrected image did not reach the mountain regions until later still, so the sets there were all upside-down (with the viewers sitting the right way up)........

Do you think Uncle Adonis could come by my house and tune my TV? It is really in need.

Well, uncle Adonis was doing door-to-door fine-tuning for the lucky families with the first sets, but I believe most people shared the test-card viewing experience with their less fortunate neighbours.........

did he invite the neighbours in to watch?

This priceless painting hangs in the 'fairly modern' section of our Art Gallery......
Here we see the very first TV set in Bonga-Bonga, from the days when the image came through upside-down, and before anyone had thought of turning the set the other way round for an almost enjoyable viewing experience!.......A smart young(er) uncle Adonis fine-tunes the beautiful test-card image, which could be seen for many hours of the day - much to the delight of this lucky Bonga-Bongan family!.......