Kookaburra swooping on meat on back railing. 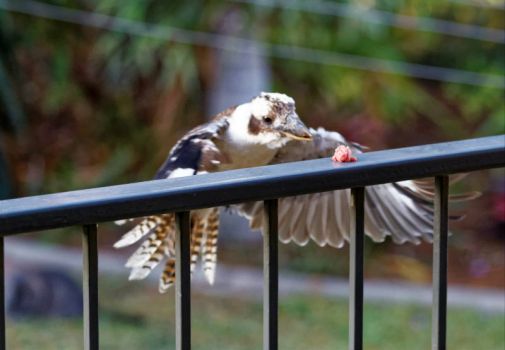 Jeremy had lots of trouble catching this photo - even when he had his camera set to 1,000th of a second shutter speed!! He was a super-speedy swooper!!!

Good job Jeremy! Thanks to you both!

Drats - that's annoying Shirley:(((( Hope that you get one OK!! The SX60 is slightly different to the SX50 - so I hope all goes well with it:)))) Jeremy gave me a USB2.0 UDMA reader that I slip the SD camera card into and then plug into the computer - and that works well. Here's hoping you sort it out tomorrow:))) Cheers:)))

On unpacking the camera I find they now don't give you a USB cord to download pictures to a computer or software, that has to be downloaded. I'm hoping to pick up a USB cord tomorrow, I love the camera so far. Thanks again Rob.

Hi Rob, I've sold my camera and have purchased a Canon SX60HS, Thank you again for the info Rob.

Am singing along with you, smllpkg! Another superb photo by Jeremy.

Excellent job, Jeremy. But now, all day I'll be singing "Kookaburra sits in the old gum tree....." instead of Christmas carols!

Thanks Floyd:)) I'll pass on the compliments:))

Pretty darn spiffy I reckon Chrissie:)))) He takes some super shots. Thanks :))))

How good is that! Well done, Jeremy!

Thanks Janet - he had quite a few misses and half shots :))))

Great job Jeremy, yes they are so fast. A fabulous photo. Thanks so much Rob and hugs ♥

Thanks Sally - I'll pass the compliments on:)))

Thank you, Rob, for the info, I have a Canon with multiple lens, and I'm finding it is a bit above me, so I'm selling it and I'm hoping to purchase one like yours, or similar.

I use a Canon SX50HS - which is a 'point-and-shoot' and Jeremy has a much bigger Canon with multiple lens that's way out of my league technically:)))) Janet also has a similar model to mine & is happy with hers, Thanks Shirley:))))

Well done, Jeremy, great catch, Thanks, Jeremy and Rob.
Rob if you don't mind me asking, what camera do you use?