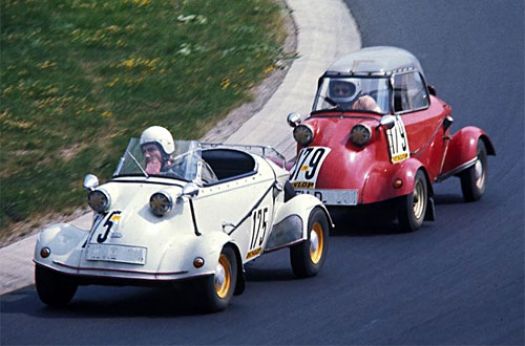 Moto is my buddy, if it is a car he knows the answer. Especially if it is a European make.

Thanks moto. I appreciate the info.

Hello there,
That was standard production variant, model TG500, known as "Tiger", with some 500 examples produced. Show-off example now could be bought for somehting less than 100,000$$$... It had two-cylinder, two-stroke air-cooled engine at rear, with some 20 HP. Performances was:

... and, yes - it could be raced in European class 500 cc for touring automobiles! Often, it was better than twice bigger automobiles, especially on mountain rallies, or hill-sprints.
Ciao,
Zoran
P.S.: Except Isetta UK models with three wheels, all other had four wheels (two at rear were quit close one to another). Messer had mostly 3 wheels, except Tigers... Could bought any of them in my youth, for really small money and now be very rich after selling them!

I believe (if memory serves correctly), that both the Messerschmidt and the Isetta were produced ( in very small numbers) with 4 wheels. I can only imagine a race with 3 wheelers.

Cool looking though..... Must have modified them? I thought they only had a single wheel in the rear.

Just a bit of an oxymoron? Micro cars and racing??? LOL