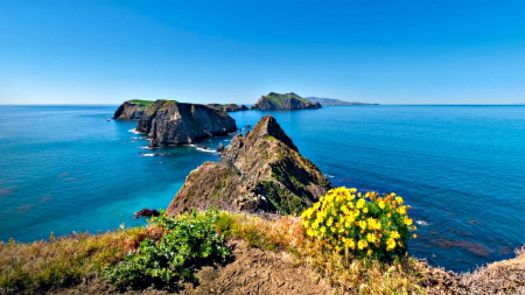 The large Coreopsis shrub is prolific on all of the Channel Islands, but can also be found along the coast from Central California down to Baja California. It’s found mostly along sea bluffs, coastal dunes, and hillsides in community with other plants like seacliff buckwheat, coast goldenbush, and red sand verbena.

The giant coreopsis is a succulent, yet woody plant. It has thick, strong stems that can grow to a towering height of eight feet. The plants’ large size can be attributed to the ‘islandification’ effect – which causes a significant change in size due to the availability of resources on an island. (Think of wooly mammoths shrinking into pygmy mammoths because of the lack of food and space on the islands). Without widespread herbivores on the islands, giant coreopsis was able to evolve to grow larger and more succulent without the threat of being eaten.

Despite its size, giant coreopsis is often recognized by its bright, highlighter-yellow flowers. In the spring, vast fields of these flowers can stretch to the horizon on islands like San Nicolas and Anacapa. With Anacapa Island hosting the largest protected breeding colony of western gulls in the world, those fields of giant coreopsis play an important role in providing shelter for nesting birds in the spring.

As the plants dry out in the summer, their flowers wilt to a soft brown color and produce seeds that resemble ticks – giving the plant its other maligned nickname of "giant tick-seed." Throughout the dry summer and fall, these drought-tolerant perennial plants stand dormant in wait for the next season’s rains.

Anacapa Island is a small volcanic island located about 11 miles (18 km) off the coast of Port Hueneme, California in Ventura County. The island is composed of a series of narrow islets 6 mi (10 km) long, oriented generally east–west and 5 mi (8 km) east of Santa Cruz Island. The three main islets, East, Middle and West Anacapa, are collectively known as The Anacapas. All three islets have precipitous cliffs, dropping off steeply into the sea.

Anacapa is the smallest of the northern islands of the Channel Islands archipelago, and is within the Channel Islands National Park. It is 9 miles (14 km) across the Santa Barbara Channel from the nearest point on the mainland. It lies southwest of the city of Ventura.
Created by tinakinnard Published 17 September 2020