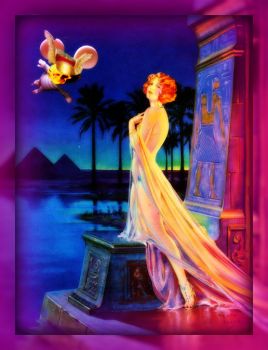 Yesterday, I donned my Mercury hat in order to take a little spin round Further-Farther-Bonga.........I appeared before this nubile nymphette, who sighed and promptly looked away, as if dreaming of love.....
She mumbled something that sounded like "Squirty........Squirty......wherefore art thou, Squirty" - though I could be mistaken......
Created by lelabugosi Published 11 June 2013
Why this advertisement?

A certain old lady called Dot
Complained "Everything's slipped down a lot.
I look where it was
And it's not there because
My gravity's losing the plot"

Doesn't that limerick somehow relate to a well known city in Thailand?

Thank you David. I've been wondering if I'd ever get a chance to use this one.

There once was an Emu named Lalu
Who caused quite a Hulla Balloo
Naming Ulalume
One wonderful day
The most beautiful woman that He Gnu.

Ulalume,
sweet Ulalume,
the most beautiful name for a woman,
according to whom?

and Thank You for all the fish...

Aye
Wotta beautiful Sight to
Behole
upon re-emerging into the world of
FFB (which everyone of sound Mind-an-body knows is NOT in Egyptia)
Aye
I am
beholden
to Behold in
this image
such
bold (FF) Bongan
Beauté.

I am glad to see the two lotharios, Mr.Le-Squirt and great-uncle Roger getting along so well..........sort of.....
double-batter........The 'Egyptian' monuments here are all designed by great-uncle Roger.......He had planned to erect them in Outer Mongolia, but as he got lost, he had a change of plan and used the plans planned for Outer Mongolia here instead..........
thank you, thousands-of-cakes.......Of course I barely gave the nubile nymphette a second glance......

Are we discussing the Egyptian throne?

Monsieur le Squirt you made me laugh, pip-pip old boy!

'twas simply a mission of goodwill.........in order to establish friendly relations between the inhabitants of Bonga-Bonga and Further-Farther-Bonga......(we are now on friendly terms)........

Good question! What does Mrs B think about you fluttering around nubile nymphs in their negligees, at night?
Toodle-pipski !!

Dear Lela, after viewing the nubile nymph... I have to inquire...did Mrs B approve of your little visit to FF Bonga?? ;^)
Toodle Pip!

Oh, well, "Mr. Sensitive" . . . . . okay, that's better. That's what some of my female clients call me, er, um, y'know, afterwards, so to speak. Because I cuddle with them AND make them think I like it, even though I'm bored out of my mind at that point.

You guys toodle-pip me once more, and I'm gonna have to come over there!

See what I mean, what I mean when I refer to "...this endless litany of slurs, calumny and aspersions I suffer." ? ? ? ? ? Hippolytus gloms his big hairy hand onto some wimmins suffragette's cute little bottom, and when SHE screams HE points at ME, and I get run out of town on my little pink fairy-bike (while the ladies all take HIM to the beach), and to this very day it's nothing but an "...endless litany of slurs, calumny and aspersions" now coming from some HIGHLY SUSPICIOUS NEW RELATIVE of Lelabug's called something like Roger "Left-Eye" Bugosi, who doesn't even know me or the LOVELY ULALUME (pictured above).

"Squinty" my *ss! Ulalume wouldn't have anything to do with some parched, raggedy Foreign Legionaire named "Squinty!" Especially one who left for Outer Mongolia! Sheeesh!

not unless she has found the secret of eternal youth, even I was pretty nubile then. Reminds me of that H Hider Raggard tale 'She' before it all went wrong

I have pondered and pondered the identity of the fair maiden's true love, and have finally at the end and ultimately come to the inevitable conclusion that it cannot possibly be Mr.Le-Squirt, who was banished unceremoniously from this land........
I also believe the name uttered to be not "Squirty" but "Squinty".........Could she be referring to my great-uncle Roger 'Squinty' Bugosi, who left to join the Outer Mongolian Foreign Legion in 1958 and has not been seen or heard of since?...........

Mistaken, lelabug? No, not mistaken at all........and of course she turned her eyes away from your freakish, garish, strange, peculiar appearance in her soft moonlit Egyptian sky.

But fair maidens such as the lovely Ulalume pictured here are typically, yes typically in my thrall since I am such a sensitive, attentive and kind soul. Ahhhhhhh, Livinia. Dear waif, darling, sweetie, would that I were free to come to you tonight..........However, my 1-800-555-getlucky phone is ringing off the hook with other fair maidens calling and imploring me to give them my attentions. I fear it may be a week or more before I can pay you a call, Ulalume dearest.

You MUST have been mistaken. This nymphette couldn't be so deranged or lost to all sense of reason.