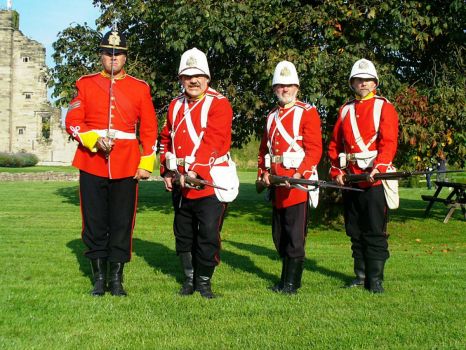 Britain, and England in particular, is like living in a museum! They are so obsessive about preserving their past, they leave themselves insufficient room to live in the present!

Along with that, they love re-enacting things. I'm not sure what these guys were re-enacting, but whatever it was, they were very serious about it!

I think I took this picture about eleven years ago.

I followed the recent referendum with great interest. Scotland's North Sea oil revenues are the only thing keeping the "United Kingdom" afloat. If the referendum had been in favour of Scottish independence, England would have been bankrupt.

And it wasn't only Rob Roy's generation that had to fight off the English! I was surprised that the referendum returned the result it did.

Thanks for your comment. You are correct: I am Scottish and I would love Scotland to be recognised as an independent nation, but for many years most major companies, if they are at all successful, find themselves acquired by English companies and moved south. Is that asset stripping or what?
You will probably know that there is now a Scottish parliament with a similar one for Wales and Northern Ireland, but is there an English parliament? No. So we are only allowed a little freedom which can, and often is, overruled by the English MPs. Sorry, I didn’t mean to sound grumpy but I think Rob Roy and others of that generation fought to retain a freedom that we have allowed to be taken from us.

And are ye a Scot, by any chance?

I suspect (but I'm still not sure) that I'm a descendant of the notorious Rob Roy McGregor.
On my first visit to Scotland I was taken totally by surprise by the intensity of my emotional reaction to just being there. I visited the place of the massacre of Glencoe, did an extended twilight walk through the battlefield at Culloden, and also made a point of visiting many other places of historical significance. For a reason I still can't explain, it all just felt like a long-awaited home-coming. I'm still looking forward to going back, hopefully for longer next time.

By the way I’m glad you didn’t include Scotland in your assessment of the UK situation. Scotland were never involved in empire building and had no overseas commitments at all. England, as far as I can see, would have liked to rule the world and in fact continued that way of thinking even after the ‘Union of the crowns’ of Scotland and England in1603.

Thanks for sharing. They look as if they are the last men standing at the Boer War.