If you call it a Terrine, it makes it so much better... 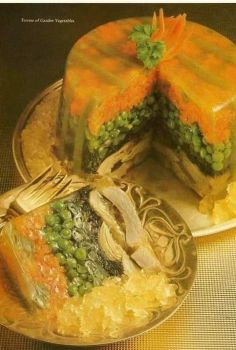 Janie I snopes checked it and that rumour about her fatal injury was false so thanks for mentioning it. ♪♥♥♫

Jane Mansfield was killed in a horrific car accident between Biloxi, Ms. and New Orleans, La. in 1967. It was very foggy on the coast that night. She had performed at a Biloxi night club named Gus Stevens Restaurant and Dinner Club, and was going to New Orleans to the airport. The club owner had a daughter, Elaine, that was engaged to Ronnie Harrison who was diving the car. He also died in that terrible crash. He was a few years older than I was but I knew him and Elaine. He was a star basketball player in high school. I think he was 20 at the time perhaps.
It was a terrible accident and many rumors about it are not true.

No they were hurt, but lived. But it is sad.

Thank you Bs - I meant any other siblings in the car. ♪♥♥♫

No, Mariska Hargitay and her brothers were not killed.

I hope her children weren't all killed as well Ianto?

With her children in the car with her.

Jayne came to a very untimely death - not to put a damper on it but I believe she was dicapitated in the deadly car crash.

Not a fan. I’ll look up kavorka.

Are you a Seinfeld fan? Peter is very handsome, but Jason has the kavorka. In spades.

Yes he is. Who'd you rather, Jason Momoa or Peter Hermann?

So much for my reading skills. Peter Hermann is handsome as heck.

Peter Hermann (Mariska's husband) has had a recurring role on Law & Order:SVU. That's where they met.

The tall guy in the Persil commercials is actor Peter Hermann, who is married to Mariska. Mickey Hargitay, Mariska's father, was a Hungarian bodybuilder and actor who was married to Jayne Mansfield.

Jayne Mansfield was reported to have a high IQ...

Ya know the tall guy in the white dinner jacket in the Persil commercials? Married to Mariska...

Just looked her up and she is indeed JM's daughter, she also speaks 5 languages so is neither dumb, nor blonde. I speak 2 languages, English and Shorthand so she has me beat ! ♪♥♥♫

You are welcome, Sharing info is what we di here.

mpp, I like your analogy of pushing me in a river and seeing where the current takes me. I had used 'the weather vane of sanity is always turning' only because I like to think I can "leap buildings in a single bound", but I will try to think of a more accurate analogy... something about a boat spinning it's wheels in a gravy boat full of diminishing IQ or a donut bobbing in a sea of consciousness. I'll keep you posted....

Dear TIM, please do not 'credit' me... ever... for inspiring you to launch into one of your
discussions. I simply stand on the banks of the river, push you in, and see where the current takes you.

My interest in these culinary delights is simply how much gelatin did a generation need to eat. And why? It seems like it was the Super Glue of the 50s, which has inspire me to try one of my own. I'm thinking Cheetos, wax lips, and turkey jerky...

Well, I didn't neeeeeeed to know the 'facts' about Marilyn and Jayne, but I find your info most interesting. Nice to know you have confirmed my initial observation regarding Jayne being the poster child for the jiggliness of Jell-o gelatin

"She had a large bosom, 'bout the size of New Delhi
That shook, when she laughed like a bowlful of jelly."

Apparently during the mid-sixties a civil war broke out between the "have's" (led by the likes of Jane Russell, Sophia Loren, Jayne Mansfield and Raquel Welch) and the "have not's" inspired by their war chant "more than a mouthful is a waste" was led by Twiggy, and ummmm.... Boy George? The fact I can't think of any flat chested stars may be a testament to my preferences. And this "civil war" seems to continue today with the onslaught of pint sized, under nourished actresses adorning the silver screen. Fortunately for the fantasy starved men scattered across our great land, the likes of Scarlet Johannsen, Salma Hayek and Lindsay Lohan* are fighting back with their 38" howitzers and "Double D" hand grenades.

* - the 'weather vane of sanity is always turning' young lady that did a "Marilyn Monroe inspired 'layout' (and I use that term loosely) in Playboy magazine.

As for me, I have no preference, but I will ad that I, "being of sound mind and deprived body, do hereby declare.... may the best breast win"

mpp, thank you for inspiring me to do about 2 hours of diligent research while composing this relatively short (by my standards) comment . I now have a spring in my step and a twinkle in my eye... and cannot wait until nap time...

Whaaaaatttt? You posted Jayne Mansfield puzzles and I missed them? You know I would have been there if I had known. So tell me, was it Jayne Mansfield's jiggling that inspired you to post Jello puzzles?

There. I was there.

Where were you guys when I posted my JM puzzles and no nobody showed up? These Jello concoctions have been more popular...

I would vote for Jason Momoa. For anything.

Ms Bluesox, you shamed me into looking up "terrine" in the dictionary. After viewing this recipe, I thought a terrine was a brand name of a vegan oil filter for my 4wd Jeep, which is an "all-terrine" vehicle. I think I may have been wrong (but don't expect me to admit it)

If Jason Mamoa is back to wrestling in jello, I would guess he has had a couple too many head butts. But on the bright side, if Jason Mamoa continues getting head butts he could be a top notch congressman

What Juba ! is Jason Momoa back to wresting in jello? !! I thought he gave it up for good after Aquaman.

There's enough gelutinous gelatin 'rub' here to give him a head start in the wrestling ring. ♪♥♥♫

Nothing belongs in jello, or jelly as we call it in Straya. Except wrestlers. Maybe.

When Mother was in her 80's, she finally moved out of the old house and into an apartment complex for seniors. I took her to lunch one day and when we got back to the apartment complex she saw an old man and turned to face me (in the car) so he wouldn't see her face. I asked her what was up and she said, "Oh, he's been pestering me. I don't want to have anything to do with him. He's just looking for someone to cook for him." I said, "Boy, is he barking up the wrong tree!" She didn't react. I think she was too far gone at that point to see either the humor or the insult.

Maybe it is just a typo.. it should be "Terrible with Garden Vegetables". Didn't think you could ruin veggies, but it looks like they sure tried here. :-)

Well, I have been trying to track down a recipe for this...concoction...and have failed!
Oh, I did find several links to the recipe, but none of the links worked. :(

I did find some information on a blog site: yuckylicious.blogspot.com/2011/09/terrible-terrine.html

They reference a book titled "Cooking with Bon Appetit Appetizers". I wasn't able to located an eBook version or a table of contents, but there are several copies available online starting at about US $2.00.

The book is described as:

Your mother was a wonderful cook compared to the creator of this.

Oh, UGH! Thank goodness my mother was no cook. She never made a casserole, much less anything in gelatin. It was overcooked meat, green beans or peas out of a can,and iceberg lettuce for us. This makes me shudder with revulsion. Thanks (I think), Merrie!

Bluestockings...I am pretty sure it is supposed to be unflavored gelatin...possibly made in this case with chicken stock instead of water. It was all the rage in the '50's and 60's. I may be wrong as I don't actually have the recipe, but I have read recipes like this one.
Merrie

You can call it what you want, but nothing will make it better.

I have to admit, I am curious. What is that stuff on the side, that surrounds the "terrine"? Any idea?

Peas, and what else? No they don't.

I will still argue that meat and vegetables don't belong in jello. ;)