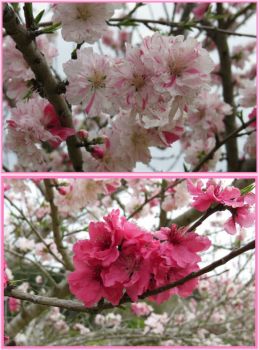 ...both colours on the one Cherry tree, at the Japanese Gardens, Toowoomba.

The Carnival of Flowers is on for 10 days and we went last Sunday.

Toowoomba is 125km (75miles) west of Brisbane (1.5 hour drive) on the edge of the Great Dividing Range and is 700 metres above sea level. Because of this elevation it has a cooler & dryer climate than Brisbane.
Created by robryan Published 28 September 2014

My pleasure Maureen - thanks!!

I've posted the best ones Dave - sorry:(( That might explain it then Dave - as I've got no idea!!! Thanks!!

Thanks Cathy - it sure was pretty!!!

What a gorgeous tree!!

I hope you took a thousand photos and we'll get to see this place for a long time Robyn!! I would still feel pretty sure its grafted...maybe many many times to give the effect.

Thanks everyone for the comments - they are much appreciated! I've been a bit busy - so haven't been on on Jigidi very much lately!

Beautiful blossoms Rob, thanks for sharing.

Would be very nice to see this - lovely.

Just stunning, Rob! So nice to see the signs of spring - Mr and Mrs Duck still have 14 ducklings and they're munching on the front garden right now!

It was a bit unusual and puzzling Janet - but it looked really nice. Thanks :)))

Thanks Floyd and Jacki - pleased you liked them:)))

love this one too.

Great colors on the cherry tree.
Thanks Rob.

Stunning blossoms, thanks Rob. Amazing that they are both on the same tree. Yes I wondered like BK, were they grafted, but it sounds like it's not. Hugs, janet

That would be wonderful Lunie:))))

The colours were randomly scattered throughout three trees Beekay - and just plain mixed in - so I'm just not sure how it happened! Thanks!

Perhaps the two were grafted together Rob. Both colors are beautiful and so is your collage. TFS!!

am still dreaming of a trip to see the Cherry Festival in Japan lol!

I guess it could be Lunie - but there were no ID signs that I saw. Yes - the mix of colours was intriguing! Thanks!!

I'd say so Barb - most Japanese Cherry trees are I think! They grow them for the display! Thanks!!

That must be an ornamental cherry, not edible....right? Unusual to have two color blooms on one tree...thank you Rob :)

could have been a hybrid...we have here a hybrid bougainvillea with three colors of flowers, white, pink and fuscia...

what amazes me in this cherry flowers was the effect that the pink in white created ... while standing alone in pink is already a beauty by itself!

That's the great thing about Jigidi ikook - we share them, and can enjoy them twice as much:))) Thanks!

I was surprised to see both colours on the one tree Lunie. Thanks :))

and how the colors made them so attractive! good shot again rob.

So many flowers... It really points out the opposed seaons on the opposed hemispheres, Rob :-)