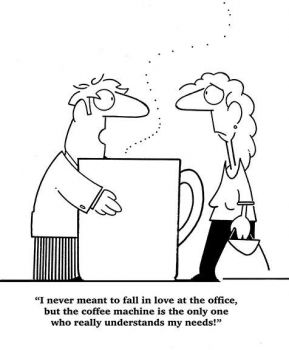 Bonnie, go straight to the doctor. If you are drinking elephant, I think you may have caught something.

Though the BEST coffee comes from Costa Rica.

Got this one. Thanks, Bonnie.

As we know that Kenya is not the top producer (even their name was a question - Can Ya produce as much as Brazil?) Answer - NO. Kenya is out.

Coffee is a brewed drink prepared from roasted coffee beans, the seeds of berries from certain Coffea species. When coffee berries turn from green to bright red in colour – indicating ripeness – they are picked, processed, and dried. Dried coffee seeds (referred to as "beans") are roasted to varying degrees, depending on the desired flavour. Roasted beans are ground and then brewed with near-boiling water to produce the beverage known as coffee.
Coffee is darkly coloured, bitter, slightly acidic and has a stimulating effect in humans, primarily due to its caffeine content. It is one of the most popular drinks in the world, and can be prepared and presented in a variety of ways (e.g., espresso, French press, caffè latte). It is usually served hot, although iced coffee is common.
Clinical research indicates that moderate coffee consumption is benign or mildly beneficial as a stimulant in healthy adults, with continuing research on whether long-term consumption reduces the risk of some diseases, although those long-term studies are generally of poor quality.
The earliest credible evidence of coffee-drinking as the modern beverage appears in modern-day Yemen in southern Arabia in the middle of the 15th century in Sufi shrines where coffee seeds were first roasted and brewed in a manner similar to how it is now prepared for drinking. The Yemenis procured the coffee beans from the Ethiopian Highlands and began cultivation. By the 16th century, the drink had reached the rest of the Middle East and North Africa, later spreading to Europe.
The two most commonly grown are C. arabica and C. robusta. Coffee plants are now cultivated in over 70 countries, primarily in the equatorial regions of the Americas, Southeast Asia, the Indian subcontinent, and Africa. As of 2018, Brazil was the leading grower of coffee beans, producing 35% of the world total. Coffee is a major export commodity as the leading legal agricultural export for numerous countries. It is one of the most valuable commodities exported by developing countries. Green, unroasted coffee is one of the most traded agricultural commodities in the world. The way developed countries trade coffee with developing nations has been criticised, as well as the impact on the environment with regards to the clearing of land for coffee-growing and water use. Consequently, the markets for fair trade and organic coffee are expanding.

The one with caffeine jitters and shakes.

I think I know this.

I think I remember what it used to be but not sure if it still is. Thanks, Bonnie.

Lol. I got this one

The one with the highest caffeine.

What do you call a toothless bear?