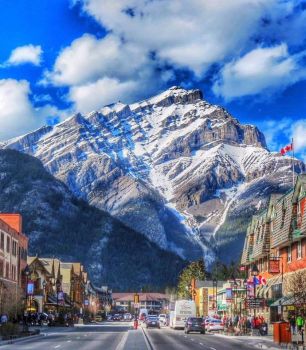 Created by cdsmith Published 22 September 2018
Why this advertisement?

rlwemm -I find that, taking into account all of the patterns in nature, the probability that it occurred by chance takes more faith than accepting faith in an intelligent plan leading to its creation.

lets look at the magnifisenc of the pictures. truly remarkable.

Fantastic remarks on the subject of religion and creation, rlwemm. I enjoy people using their brains!

The Great Rabbit says he is god.

I believe God made the mountains and the great rabbit, the street and buildings.

After further research, I bow to greater authorities that maintain that these CANADIAN Mountains were created by a trickster diety in the form of a Raven, as handed down among the Canadian Inuits of the region.
A competing theory, from tribes living further south in what is now the United States of America, these mountains were created by The Great Rabbit (Nanabozho) and the Ojibwe diety who is a shape-shifter and a cocreator of the world.
I'll go with The Great Rabbit. :-)

There is also the problem that of those who do believe in a creating god, not all of them believe that its name is "God". Creating gods are Jesus (Christian), Yahweh (Jewish) . El and his Elohim [council of gods] (early Jewish and pre-Jewish). Allah (Muslim). Waheguru (Sikism), among the monotheistic religions. Among polytheistic religions, any number of Hindu gods are believed to be Creating Gods. (Vishnu, Brahma, and so on). Then there are the religions with NO creating god (Budhism, Janism) . , In Chinese Traditional Cosmology Pangu can be considered a creating god, but I do not know if this god is worshiped in the traditional western sense.
Of course, every right thinking person knows that these mountains were created by Jasagnan, the creator of the world in Kazakstan. :-)

Many do, Hjalmar, but that does not change the fact that he higher your science education and the more prestigious your research career, the less likely you are to believe in that kind of god. Those with the most international prestige as scientists have a very low level of belief in any kind of supernatural being. Among those with professional degrees in just about anything about 60 -70 percent of graduates no longer believe in the existence of gods or have no interest in religions. This percentage is lower for those with qualifications in authoritarian subjects, such as medical practice (as distinct from research) and economics. The lower down the educational rung we go, the more people tend to believe in some kind of god or " higher power", but this varies a great deal by nation, with the USA being an outlier among developed nations. Generally speaking, the colder the regions, the fewer the god believers, and the higher the general education of the average citizen.

While these may be interesting or alarming figures, depending on your socialization and group-dependencies, all that they should mean here is that we should all be aware that this group is unlikely to be homogenous in its religious views.
.
The world of the internet is multi-ideological, multi-cultural, multi-racial and multi-national. My point is that you cannot assume that everyone in this international group believes in a god, or in a conservative view of the Christian god. Let's try to make everyone welcome here., including those with views, beliefs and culturally acquired attitudes that differ from our own.

I am a scientist and believe in that kind of God.

Llong33, that comment only works is you believe in the existence of a creating god. In these days of widely available quality science education there are a significant percentage of the world's population who do not believe in that kind of god, or even in the existence of any god at all. Let's be inclusive here. Let's all enjoy the scenery, regardless of how we think it got there.

God's magnificent mountains as a backdrop! Thank you for sharing. Lorraine

At least I got the country right. :-)