The Sense of Being 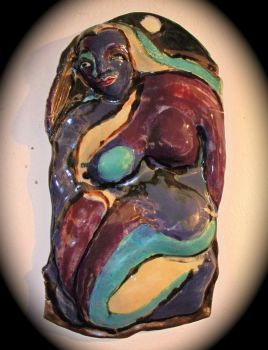 Thank all of you and thanks for the comments. Deborah works from images of the Goddess as well as from her own imagination and feelings of being a woman in this culture of the americas, specially north america; Her studys and art come from the ancient women of "old europe" In the time of woman power and the peaceful world of that time. In all the diggings and study of that time there has been no discovery of tools of distruction.

Perhaps she'll show up sometime later and inject some factual information to supplement our speculations and flights of fancy! Regardless, it's an intriguing piece.

I wasn't thinking that it is, but just that the artist may be an ethnic European and not necessarily rooted in South African culture or aesthetics. Actually it's rather reminiscent of European impressionism, don't you think?

it does not have to be a self portrait.

The LeSueur I tracked down is not African, however, but a descendant of the colonizers (like most of us in the U.S.)

it does seem to come from Africa- a lot of power, there. And mystery,

I like it! I tried to find info on the artist. There is a Deborah LeSueur from S. Africa who paints wild animals. If it's the same artist, this is quite a departure.

@judyredhorn
what do you think of this sculpture?

This is such an interesting work and so different from the "teaser" representation- l wonder what the artist has to say about it- What do you think, Scotty, since you selected it? l would enjoy discussing it with you.